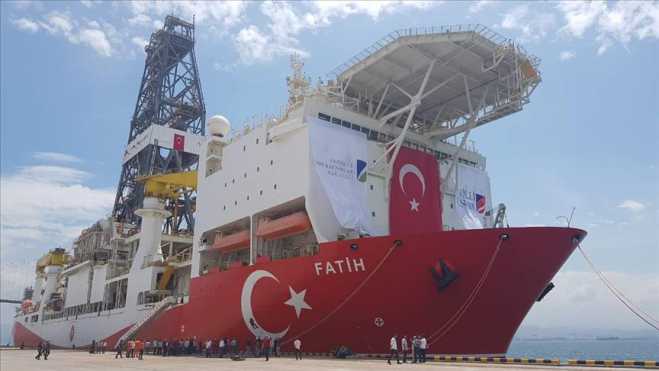 Greek Cypriot President Nicos Anastasiades has called Turkey's deployment of a survey vessel to drill for hydrocarbons near the island a "second invasion" and a breach of international law, Greek newspaper Ekathimerini reported on Tuesday.

Turkey invaded the island in 1974 in response to a coup d'etat backed by Greece's nationalist government.

Ankara has sent its Fatih vessel to the area to conduct drilling for oil and gas with plans to conduct the drilling not inside Cyprus’s actual EEZ, but in territory that Greece claims for its own.

“Your actions are violating the international law and maritime safety procedures and you are committing serious criminal offences under the laws of the Republic of Cyprus,” read the Greek Cypriot's message to Fatih drillship and supporting vessels.

An international arrest warrant against the crew assisting Turkish vessel was issued according to European and international laws, the Hellas Journal reported.

However, a later statement from Undersecretary to the President Vasilis Palmas clarified that the warrants were being prepared but had not yet been issued.

“We’re in the process of identifying the individuals and collecting data on the crews, because the application must be thorough and airtight if it’s to stand up in court,” he told the Cyprus Mail Online.

Nicosia continued to gather information on the crew on Tuesday as the vessel remained stationary within the EEZ claimed by the Republic of Cyprus, the news site reported.

The arrest warrant is expected to be filed in court this week, and if approved will then be relayed to Interpol and Europol, it said.

Local press reports the Turkish vessel is being supported by three ships belonging to Siem Offshore, "an international offshore and subsea shipping company registered on the Cayman Islands with its main offices in Kristiansand, Norway."

Ankara has been in a bitter dispute with Athens and Nicosia over the island's EEZ and drilling hydrocarbons in the Eastern Mediterranean.

Ankara objects to Cyprus and Greece’s efforts for gas exploration in the Eastern Mediterranean and says northern Turkish Cypriot state - which is only recognised by Turkey - should receive a fair share from gas resources of the disputed island.

The island of Cyprus has been divided since 1974 into predominantly Greek south, whose government is internationally recognised, and the Turkish north, whose sovereignty is only recognised by Ankara.