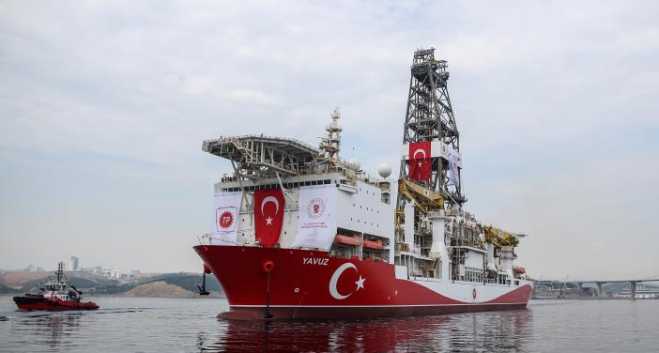 France, Russia and the UK have called on Turkey to avoid escalation in the Eastern Mediterranean and respect international law, following its expressed intentions to start drilling off the coast of the Republic of Cyprus.

Russia
Russia said Monday it was following the developments in Cyprus’ exclusive economic zone with concern.
“We believe that any violation of Cyprus’s sovereignty can only hinder conditions for a durable, viable and fair resolution of the Cyprus issue”, the Russian foreign ministry noted.
“We urge all countries to refrain from steps leading to the build-up of a crisis potential in the Eastern Mediterranean, to display restraint and political wisdom, and to strive to resolve any dispute through dialogue and respect for each other’s interests.”

France
After Egypt released a statement on Tuesday evening, France followed suit, with Paris urging Turkey to avoid any action in the Cypriot Exclusive Economic Zone (EEZ), which would contravene international law and jeopardise regional stability. In a statement released by the French Foreign Ministry, France reiterated its strong commitment to show solidarity to Cyprus and its support to respect of international law.

Britain
The UK also expressed its concerns over Turkey’s actions off the coast of Cyprus. A representative of the British High Commissioner in Cyprus told the Cyprus News Agency that the United Kingdom has repeatedly expressed opposition to Turkish drilling projects in the waters around Cyprus and “this includes drilling off the northeastern coast of Cyprus.”

EU
Meanwhile, the EU High Representative/Vice-President Federica Mogherini condemned Turkey’s declared intention to illegally conduct a new drilling operation northeast of Cyprus is of grave concern. This second planned drilling operation, two months after the start of the ongoing drilling operations west of Cyprus, is a further unacceptable escalation which violates the sovereignty of Cyprus.
We call on the Turkish authorities, once again, to refrain from such actions, act in a spirit of good neighbourliness and respect the sovereignty and sovereign rights of the Republic of Cyprus in accordance with international law.