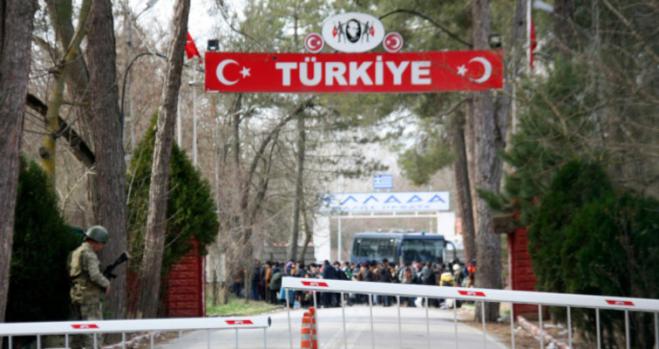 The day that dawned is not like all the others. It is an extremely difficult day, since in the morning and as a result of developments in Syria, Greece is facing the possible attempt of a mass invasion of migrants-refugees from Evros. Possibly, what we have been seeing since morning is just a foretaste.

This is a political decision by the Erdogan regime, which is trying to impose costs on NATO and the EU because they do not support it militarily and financially on the Syrian front. On the one hand, this is demonstrated by the automation of the process and the wide publicity given by the Turkish media. We recall Turkey's responsibility for the outbreak of the Syrian civil war that has claimed the lives of more than 300,000 people.

The West has to confront a country supposedly allied, which in practice is not endowed with the same values ​​that guide Western policies. Nevertheless, the West's response to this challenge is manifested in a way that justifies and reinforces Erdogan's logic. The result is instead of deterring the threat, it is constantly escalating. To blame the Erdogan regime for pursuing a policy that proves successful is diplomatically stupid and at least hypocritical.

The problem for Athens is vital because the threat is directed against Greek national security. Evidence of migration flows recorded as a result of the Turkish military invasion of Syria does not allow for complacency, especially when Ankara is officially acknowledges it as Erdogan's personal decision. The bottom line is that Greece is in a state of emergency.

The Mitsotakis government is facing the worst crisis. It is a crisis that threatens to blow up anything positive that has happened in the last few months since the elections. This is unquestionably true, whether or not Greek governments over time refuse to realize that security is by no means a prerequisite for the success of any economic recipe. It is obvious that they do not realize it, even though they use it in their rhetoric. If they were aware of it, political decisions and priorities would be completely different.

The problem has arisen, as mentioned above, from the recent developments in Syria. The well-known divergence of views between Turkey and Russia has escalated dangerously, and the mechanism for controlling these differences has failed to resolve the problem, by reaching yet another compromise. The most likely version of what happened in the last 24 hours in Idlib is that Turkey embedded its troops within the ranks of the cooperating Islamist militants who did not inform the Russians as envisaged by the bilateral agreement, so as not to be accused by the Russians of aiding terrorist militant organizations that are affiliated with Al Qaeda and the Islamic State.

The Russians obviously knew it, or at least assumed it. Since being formally covered, they gave the coordinates of the targets to Syrian forces - reports also mention the involvement of Russian fighters - resulting in hundreds of casualties, including dozens of Turks. These developments logically constitute the "tombstone" in the Turkey-Russia strategic partnership. Signs of deterioration were already visible. Simply put, if this bloody event had not happened, there would have been room for a compromise solution, which would postpone the final act of the drama for later.

However, the big picture in the strategic competition in Southeast Europe is more worrying and one that poses a long-term threat to Greek national interests. The West wants through any means to bring Turkey back to its own fold, facing Russia as a major threat. On the other hand, Moscow wants to prevent this development. Turkey serves Russian foreign policy as a destabilizing pillar through the division of its main rival, NATO, which it considers a "tool" for the US.

Erdogan's Turkey has always wished to negotiate with both sides in order to exploit competition to its advantage, gaining benefits from both. It was an ambitious policy that, however, hidden the danger of being confronted by both. Russia has not abandoned Assad, but the US and NATO are adopting a pro-Turkish rhetoric, trying to break the Moscow-Ankara relationship. These words, however, are not accompanied by deeds.

NATO refused to activate Article 5 and opted for the Article 4 consultation mechanism, which was to be expected, since an active involvement on the Turkish side of the Syrian front would risk conflict with Russian forces. Such a development could rekindle other fronts, such as the one in Ukraine, where the geographical location would be in Moscow's favor.

Simply put, it is highly likely that Greece will face a threat and that its interests will not be the same as those of the West. The government must immediately close the border and quickly activate the Armed Forces before the situation gets out of control. Will Athens accept pressure from the EU and NATO not to close the border? If this happens, the divergence of interests will have been confirmed. Greece, however, must do what its own national interests imposes, not the interests of others. It has to face Turkey, which is responsible for creating the problem.

A proper reading of the situation

From this point of view, partners' sensitivity to the problems posed by Greek national security may prove to be diminished. This applies to both migrants, for example and the issue of building an alternative Black Sea access road that will free the West from the obligations of international agreements of the past.

Having said that, the real problem is whether the situation will be properly read by the Greek leadership in order to take measures to prevent the worst-case scenarios. To do so, the culture with which the Greek elite is infused must be abandoned. If we perceive the problem in all its dimensions, then and only then will there be any hope of successful action.