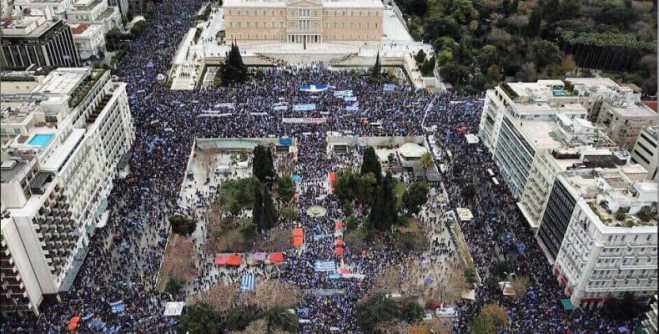 Whoever walked among the crowd at yesterday's rally in Syntagma could feel a big difference in the mood of the people compared to previous rallies. This difference was that there was diffuse rising anger. Much greater than the rally in 2018. And great determination that the Prespa Agreement shouldl not be accepted.

This, before the state decided to massively face the Greek people, with an unprecedented force of police violence for post-war times. In a sense, this massive violence against young children, the elderly and, in general, Greek citizens who were peacefully demonstrating, the actions of some heatheads - unchecked and even provoking - can be seen as the symbolic end of the post-Junta era.

The politicians in power, through the Police, decided to strike demonstrators with the greatest level of violence of the past decades. It is tragic and at the same time comical that the Police counted just 60,000 demonstrators.

Anyone who was there saw that hundreds of thousands of people participated in the rally, who were unintentionally hit at that moment when the rage was already overflowing with them.

From now on, nothing can be the same in Greece. The rage of the people is rising to new heights and this will inevitably have long-term and toxic consequences on the political life of the country. And a refusal to allow them to express it through a referendum leads to a diversion from democratic norms.

And it's not just rage. It is a sense of abandonment and the ever-growing perception in society that the political system has now ceased completely to listen to the masses. In other words, there is no democracy. And this befell us with a government of the Left.

So the polarization that is being created among the Greek people is unprecedented. The national divide is not coming, it has already arrived. Right now, if we want to say things as they are, we have to admit that Greek society is already in pre-civil war period.

The political system, therefore, has one last chance. The government must understand that with the signing of the Prespa Agreement, among other things, the political stability of the country itself and the unity of the people are being jeopardized. This is something much more important and bigger than any benefits they think they will have in relations with the US, Germany or Skopje.

Even if they really think they are making the right choice on the issue of the Prespa Agreement they should understand that its violent enforcement on the Greek people will cause domestic consequences, which can not be foreseen at the moment.

And if, in any case, they do not care about this, they should, if anything, be concerned with their own political survival. Because now we are not talking about how many votes they will get in the elections.

The polarization that has been created is such that it will lead to radical changes in the country's political system and many of those who think that they are "permanent staff" of the House will become politically extinct. And this if we do not reach extreme situations, which, unfortunately, are before us.

Not only the parties but also every MP must assume their responsibilities,  against History, Democracy, popular will, political stability, and the future of the Greek people.