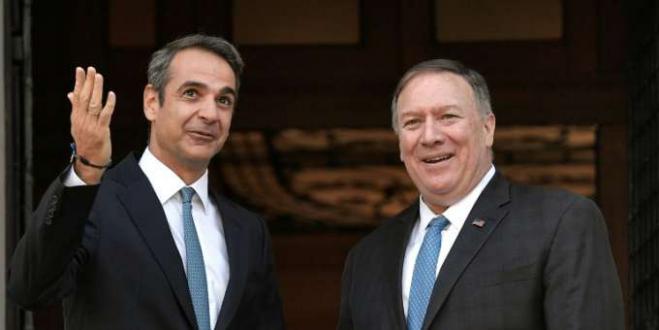 Mike Pompeo, in Athens, was charming. A ‘good ol’ boy” from Kansas joked with PM Mitsotakis, spoke of common defence interests with Defence minister Panagiotopoulos, and signed a defence agreenent with his Greek counterpart, Nikos Dendias.

And of course, Mike Pompeo said a lot, but really very little of substance was said, in front of reporters, anyway.

A lot more was uttered by Mike Pompeo about energy, the western Balkans (having toured Montenegro and North Macedonia before coming to Athens), the threat of Moscow, and generally all that is important to the USA.

Apart from a stern comment against Turkey, as expected, since during the day the Turks managed to poke their fingers in the eye of Uncle Sam. The Secretary of State was very “diplomatic” in what he said.

No one may know, at this point, what was said behind closed doors. We may learn in future decades, but for now Greece was asking for specific things: some guarantee against an attack by its belligerent bully neighbor, guarantees for the Republic of Cyprus’ rights, stop-gap measures to bolster defence (such as immediate supplies of weapon systems from US stocks. mothballed or under decommissioning).

Greece can expect very little, save on some hardware transfers from the US, but there is a small window that has been deliberately left open, and this has to do with, in terms of defence, investment in the near-dead Greek defence manufacturing sector. Anyways, so has been the leak so far.

It was a good political move for both Washington and Athens. What can Greeks expect? Not much.

As a retired general recently said: “We will fight the war, alone.”