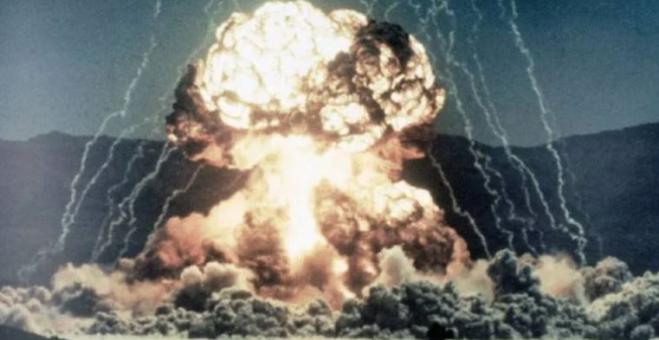 Russian statements referring to the country's nuclear arsenal have alarmed the global public and analysts, recalling a climate we have not seen since the Cuban crisis in October 1962. What will the West do if Putin becomes more likely to use tactical nuclear weapons? ; In June 2020, President Putin approved the text of the "Basic Principles of State Policy of the Russian Federation for Nuclear Deterrence", which states: "The Russian Federation considers nuclear weapons exclusively as a means of deterrence."

The Russian doctrine defines four cases in which Russia could make use of nuclear weapons:

On 24/2 Putin, in his speech on the launch of the "special military operation" in Ukraine, said: "Regardless of who is trying to stand in our way, or much more to create threats to our country and our people they must know that Russia will respond immediately and the consequences will be such that you have never seen in your entire history." This was interpreted as a threat to the use of nuclear weapons.

It was the first time since the 1960s that Moscow had made such a public announcement about its nuclear vigilance, even though the exact meaning was initially unclear. Moscow, like the United States and other nuclear powers, always keeps some strategic nuclear weapons on alert and ready for use. A statement from Defense Minister Sergei Shoigu the following day sought to soften Putin's remarks. However, Russia later conducted exercises with nuclear submarines in the Barents Sea and with mobile intercontinental ballistic missile launchers in Siberia. Also in early March, Sergei Lavrov noted somewhat vaguely that "a third world war would certainly be nuclear."

A few days after Putin's statement, President Biden remained reassuring. One week later, Olga Oliker of the International Crisis Group said: "I think it is very unlikely that Moscow will launch a nuclear attack on a target. After a week, most people are skeptical about the nuclear use case, but I will stick with this [for a while]." On March 11, however, in an article in Foreign Affairs, she did not have exactly the same opinion: "If Russia were defeated, a nuclear strike could force Ukraine to surrender," she wrote at the time, although she did not see it as possible.

On March 7, Lynn Rasten, a former White House official and now with the NGO Nuclear Threat Initiative, said: "It seems inconceivable that Russia would use nuclear weapons in Ukraine, there would be no reason for that. ». Journalist Jordan Michael Smith, who asked her, did not have the same opinion. He wrote: "The longer the war lasts, the more likely Russia is to use the world's most powerful weapons, nuclear weapons. "It's time to dump her and move on." In the same article, Pavel Podwig, a senior fellow at the UN Disarmament Research Institute, stated the obvious: "There is always the risk of unintentional escalation."

On 14/3, the G.G. "The prospect of a nuclear conflict that was once unthinkable is now back in the realm of possibility," he said. Herb Lynn, a security researcher at Stanford University and the Hoover Institution, tried to allay fears on March 15: "In terms of [level of] risk, I think we could be around 5-10%. the level of risk of the Cuban Missile Crisis ".

But in a congressional study released the same day by Lt. Gen. Scott Brier, director of the Defense Intelligence Service, he wrote: "As this war and its aftermath slowly weaken Russian conventional power, Russia is likely to rely more and more on nuclear weapons. its deterrent power to signal its determination in the West and to project power to its internal and external audience. "

Sliding towards nuclear weapon use

Since then we have new indirect Russian threats. A few days ago a professor of economics at George Mason University told Wash

ington Post that Kremlin experts say they share the fear expressed by the CIA, which recently said Putin may be tempted to use small nuclear weapons. Russian announcements during the war suggest that nuclear weapons go beyond the narrow defensive role set out in the official doctrine.

The Kremlin has highlighted fears of using nuclear weapons to pursue political goals, creating a nuclear umbrella for its conventional war in Ukraine. Through its threats, it seeks to prevent Western intervention and to maintain the conflict at the level of "local war". In this way, Russian nuclear weapons are used as a tool of intimidation and escalation management.

Putin justified the war by claiming that the United States was creating a hostile anti-Russian Ukraine, which posed an immediate threat to Russia's existence and sovereignty. This refers to the fourth case of nuclear use in Russian dogma. Not wanting the conflict in Ukraine to turn into a world war, it can not be ruled out that they will be used nuclear weapons to terrorize Kyiv. Especially if Russia has been squeezed.

A limited use of regular nuclear weapons in Ukraine, however, would fundamentally change the nature of the conflict and affect the interests of third parties. For the United States, the war is currently a regional conflict that is weakening and weakening Russia. That is why arms and money are flowing richly to Ukraine. But if Moscow were to use nuclear weapons regularly without huge consequences, it would affect the way other nuclear-armed states would assess the costs and benefits of nuclear options.

This would put US foreign and defense policy under extreme pressure, as countries such as Poland and Japan would feel an immediate threat. It could also trigger a reconsideration by Washington of its position on its military involvement in the war in Ukraine. Whether countries that are friendly or relatively friendly to Russia, such as India and China, would see some threats from that is a question. They may not want a destabilization of the international system, but breaking the nuclear taboo would benefit both, even though they would diplomatically condemn it.

The concept of the unthinkable is eroding

Russia's reputation will be shattered if it launches a nuclear attack, nullifying Putin's intention to portray Moscow as a guarantor of global stability, something many in Asia and Africa still believe. How the Kremlin assesses the risk of such a loss of prestige remains unclear. There is another reading, that with the limited use of tactical nuclear weapons Moscow would send a message of determination, which everyone would necessarily take very seriously.

Western analysts and policymakers say the risk of escalation would be very high if NATO entered the war directly, which Zelensky would like, so as to avoid defeat. That is why NATO countries have so far refrained from sending aircraft to Ukraine (on the grounds that they would have a minimal contribution to the war balance), while categorically blocking the declaration of a no-fly zone, which was also strongly demanded by Kyiv.

The escalating supply of heavier weapons systems in Ukraine, however, runs the risk of being seen by the Russians as NATO involvement in the war. One way to avoid this continuing escalation is to limit the use of tactical nuclear weapons, which would end the conflict with the capitulation of Ukraine and facing the West with a painful dilemma. The Putin regime wants to maintain itself in power, and that raises the question of how far it might go to maintain it. Western nations want to increase their economic and military pressure to undermine Russia's ability to wage war. But this is a threat, which could be an incentive to resort to tactical nuclear weapons.

The dangers for the West are already palpable. If Putin escalates and they do not react, the Western grid of defense and mutual trust will collapse. If they react, there is a danger that the war will slip into itsmost destructive and abominable form. If the conflict escalates, Russia's weakness on a regular basis will almost mathematically lead to its use of nuclear weapons. Putin sees he can gain deterrence from threatening the West with nuclear weapons. With such threats becoming more and more common, the use of nuclear weapons no longer seems unthinkable. And as the rule of the unthinkable erodes, eventually the use of nuclear power comes closer.