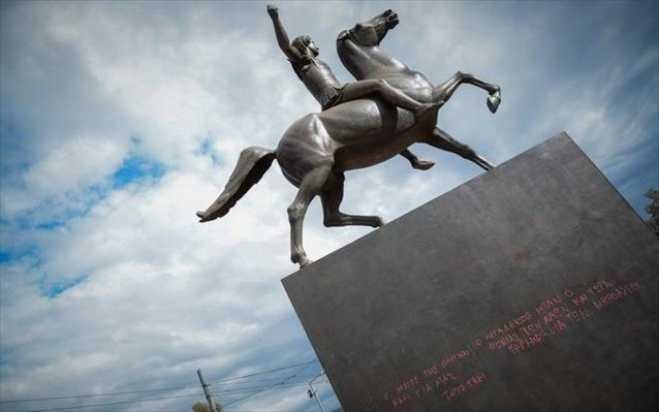 Just two weeks after its installation in the center of Athens the statue of Alexander the Great was vandalized by strangers.

On Wednesday morning, the statue placed in the heart of Athens, at the junction of the streets of Amalias and Vassilissis Olgas, was found full of painted slogans.

The defamers of the Macedonian King, among other things, said: "Alexander the Great was the slayer of the peoples, and now the pride of the petty bourgeoisie."

Once the vandalism was noticed, a guard was placed at the statue, while there is also a patrol car overseeing the area.

Damage from vandals occurred also in the statue of Kolokotronis, outside the old Parliament, on Stadiou Street. Slogans were written and paint thrown.

The 3.5 meter high sculpture, made by sculptor Yiannis Pappas (1913 - 2005), portrays Alexander the Great at a young age and was placed on the special podium designed by the architect Pantelis Nikolakopoulos, which is made of the same metal alloy with the statue.