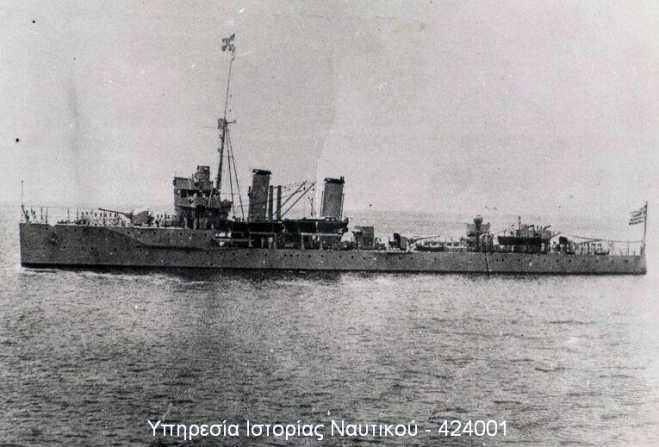 On 15 August 1940, during the feast of the Dormition of the Virgin, Greeks were celebrating the Most Venerated Mother of the Christ throughout the country. Nowhere was (and still is) the feast more auspicious than on the island of Tinos, where a famous “miraculous” icon is kept in a resplendid church. The Hellenic Navy, as always, had despatched one of its ablest ships the protected cruiser Elli to participate in the festivities and provide an honor guard for the procession of the icon.

Elli was riding at anchor 800 meters from the wharf, the crew preparing the honor guard for the procession of the miraculous icon of the Theotokos.

Outside the port the Italian submarine Delfino lay in waiting submerged targetting the Elli. A spotting plane signaled the submarine. "Everything is all right you can fire Seniore. What kind of people are these on the waterfront? I was flying over them and they waved to me ... Seniore, I'm flying back to Leros. The ship is now yours. Over"

The commander of the Italian submarine Delfino had received clear orders directly from the Dodecanese Commander De Vecci, a top official of the Italian fascist party. He looked through his periscope again and gave the order: "Fuoco". The clock showed 8.25. the commander, Captain Royal Hellenic Navy Angelos Chatzopoulos was on the bridge of the Elli being informed by the crew about the program and activities of the auspicious holiday.

Suddenly everything froze and all went silent. "Torpedo dead center! Torpedo!". They looked at each other as the 053 Whitehead Fiume torpedo sped towards them. The frightening explosion lifted the ship into the air and cut it in two. Men fell overboard into the sea, screams, pain, dead sailors.

The moment the second torpedo strikes the wharf.

One of the torpedoes struck her under the operating boiler setting her on fire and resulting in her sinking with a loss of nine crew members killed. The same submarine attempted to torpedo the passenger ships MV Elsi and MV Esperos anchored in the port. This attempt failed and the torpedoes damaged only a section of the port's wharf.

The Esperos passenger steamboat commanded by Gerasimos Fokas rushed to Elli's aid. After two hours the ship began to sink. Captain Chatzopoulos did not want to abandon ship, but his officers put him on a lifeboat.

As soon as PM Ioannis Metaxas was informed of the incident, he ordered the doxology and procession of the holy icon of the Virgin to take place as if nothing had happened. He also ordered that no one mention that the attack was carried out by Italy. The torpedoes, however, told the whole truth about their origin. After the war, it was found that it was Delfino, commanded by Lieutenant Giuseppe Aicardi.

Fragments of the torpedoes were recovered and identified as Italian in origin. The Greek government, however, trying to avoid a confrontation with Italy at the time, announced that the nationality of the attacking submarine was unknown, an act that did not forestall the outbreak of the Greco-Italian War two months later, and did not convince the Greek people who were well aware of the perpetrator.

The attack, had been planned and executed in total secrecy (not even Count Ciano, the Italian Foreign Minister knew about it), and was ordered by the Italian Governor for the Aegean, the zealous and bellicose De Vecchi (he was part of the Fascist quadrumvirato), under instructions from his superiors (it appears that the order was issued by Mussolini himself, via Supermarina). De Vecchi augmented these orders when he gave instructions (verbally) to Captain Aicardi. The intention was to intimidate Greece, not yet involved in the conflict but under suspicion, and rightly so, of favoring British operations in the Aegean.

To Greek protests, the Italian government replied by rejecting all accusations but was refuted by the recovery of the debris of a torpedo of Italian manufacture. To this, it was pathetically replied, attempting to shift the blame to England, that in the past some weapons from the Italian torpedo factory in Fiume had been sold to the British who had used them to inculpate the Italians.

After the war, Captain Aicardi alleged that he had entered the bay to hit two small merchant ships when the Helli caught up with him and looked like it was moving against the submarine: the attack was inevitable. This was an ugly episode, useless and ignoble, which only achieved the result of provoking great resentment toward Italy.
At the end of the conflict, within the peace treaty negotiations, Greece requested and obtained the assignment of the Italian cruiser Eugenio di Savoia as part of war reparations; it would be renamed, Elli. By that time the new Elli was already obsolete and considered a “White Elephant” by the Hellenic Navy.