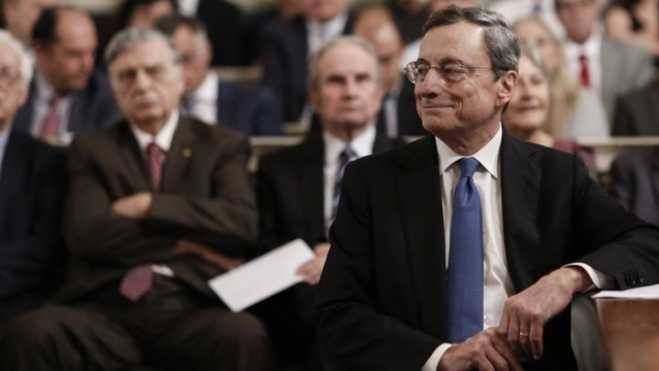 Outgoing European Central Bank (ECB) President Mario Draghi was honored by the Academy of Athens for his role in rescuing the European economic and monetary union and for his response and actions in dealing with the debt crisis in the Eurozone.

"His contribution is significant and is universally recognized," said Academy of Athens President Stefanos Imellos.

In his address to the Academy, Draghi spoke on stabilizing policies in a monetary union. True convergence, he said, is important for the cohesion of a monetary union, therefore the right national and EU policies are vital in helping countries hurt by the recent crisis, especially Greece, to reach convergence.

He defended the policy of negative interest rates and quantitative easing the ECB had adopted, and said these policies should be applied for the long-term.Draghi stressed that the resilience of the Eurozone after several years of crisis proved critics wrong. Many countries, especially Greece, had exerted significant effort to prosper as part of the monetary union, he said, and he noted that the euro enjoys high popularity as a currency.

The banker also pointed out that the monetary union was not ready to face the crisis - which few people foresaw - noting that there is enough experience now to know what stabilizes countries and what the threats are to this stability.

Mario Draghi was introduced by former caretaker prime minister and former ECB vice president Loukas Papademos, who said that Draghi's contribution to the recovery of the Eurozone was "decisive". Among Draghi's achievements were tackling the 2011-12 and 2015 financial crises, and "contributing constructively and decisively" to resolving Greek bank recapitalization and debt restructuring problems, Papademos noted.