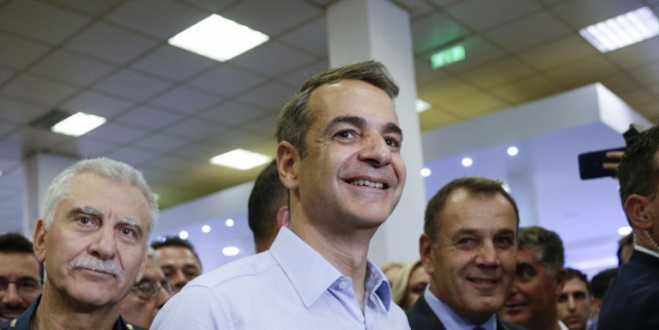 Greek PM Kyriakos Mitsotakis sent messages to many recipients from Livadia, a visit he had pledged would take place before the election.

Mr Mitsotakis reiterated in particular the promise he made before the election: "I am not going to remain locked up in the Maximos Mansion. Whenever I am given the opportunity I want to be with, to talk to our fellow citizens, to hear their concerns. I am not so interested in the praises of our efforts, but in the creative highlighting of the tasks we will have to deal with, "the prime minister said.

At the same time, Kyriakos Mitsotakis assured that "we will work very systematically, with method, we will not stop, we will not rest until we can achieve our goal. It is no more than saying that we have finally left behind the stone years of crisis. That we have put the country on a path of development and that the Greek citizens have a dividend of success from that development.

The development we envision is not just about the few, it is about everyone. The jobs we want to create are not just for those who can take advantage of them. They concern, in particular, the long-term unemployed who now know very well that they will be trapped in a 'poverty trap' if we cannot create new jobs. '

However, Mr Mitsotakis cited his recent visit to New York last week, where "I had talks with major investors who are willing to invest many billions in our country. Why? Because they see that there is political stability, because they see that there is a government committed to implementing reforms. It is consistent and sees that the creation of new wealth can only come from investments that will create good jobs. This will be done at the higher level of investment - as the one I inaugurated today - but also at the small level of the interventions in local communities that we so desperately need to create new jobs locally. "

The lives of all Greeks will soon become much better
And continued, "the new infrastructures, the care we want to give to Health, to Education are for all Greeks. So we will continue this effort, we want the party beside us to help os thrive with its energy, with the dynamism of government work, but above all we want society close to us. These bonds of trust we've built all the years of being in opposition, changing New Democracy, bringing it back to 40% - who would have expected three years ago that New Democracy would be a 40% self-governing government. I have pledged that I will repay this confidence that you have shown me, that you have multiplied."

And noting that he doesn't need a lot of communication, he said: "You yourself will know when and how your lives will get better. We will let our work speak for us, we will speak with tangible results and not fine slogans. Trust us, the lives of all Greeks will soon be much better. "