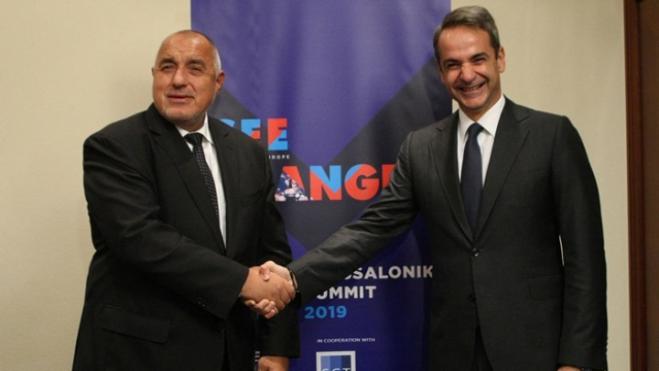 Prime Minister Kyriakos Mitsotakis met with his Bulgarian counterpart Boyko Borissov on the sidelines of the Thessaloniki Summit 2019 on Thursday evening.

The two prime ministers discussed the recent conclusions of the October 17-18 EU Council meeting, which deferred the start of the accession talks of Albania and North Macedonia.

Mitsotakis reaffirmed Greece's long-standing support for the EU accession prospects of western Balkan countries, which, as he said, contributes to regional stability, peace and prosperity. He also stated that he is ready to take initiatives in this direction, as long as candidate countries comply with conditions.

The migration crisis was also discussed, as was the EU's multiannual financial framework for 2021-2027, and Turkey's illegal actions in the Aegean Sea.Collaborations in the fields of energy, investments and infrastructural connectivity were also discussed.

They also decided that the Greek-Bulgarian High Level Cooperation Council will be held in Kavala, northern Greece, in February 2020.