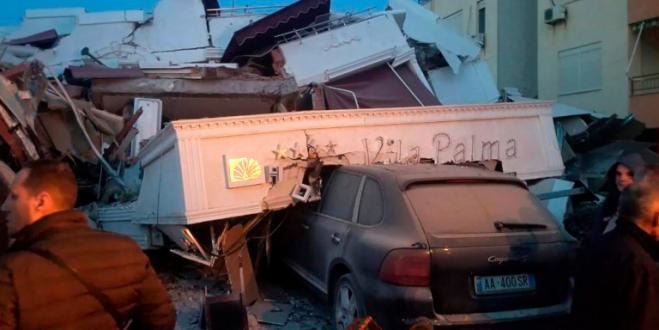 Foreign Affairs Minister Nikos Dendias arrived at Durres, Albania, on Tuesday evening, to show Greece's support in the aftermath of an earthquake registering 6.4 on the Richter scale that claimed the lives of nearly two dozen people.

Together with Albanian Prime Minister Edi Rama, Dendias observed the rescue teams' struggle to remove people from under the rubble of a collapsed building, then both men visited injured survivors at Durres stadium, which has been turned into a temporary medical facility.

According to diplomatic sources, the Albanian prime minister expressed his gratitude for Greece's immediate relief response by sending two Special Disaster Unit (EMAK) rescue teams, namely twenty-five members of the 1st EMAK with a sniffer dog that departed from Athens with a C130 military aircraft and another 15 members of the 5th EMAK that departed from Ioannina, northern Greece with vehicles and special equipment.

"I am here at Durres, endorsed by Greek Prime Minister Kyriakos Mitsotakis, with two EMAK teams to help our friends the Albanian people as much as we can," Dendias told reporters at Durres, in Rama's presence. "We too have been through this," he added, "and we are standing by Albanian people and its government, to offer every help we can."

Dendias, who flew to Albania from Skopje where he met with North Macedonia officials, then went to Albanian capital Tirana, where he was expected to meet with Albanian President Ilir Meta and Albania's Archbishop Anastasios.