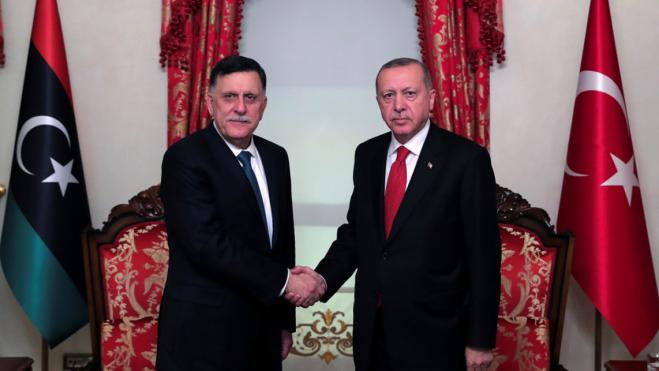 The Libyan National Army (LNA) under General Khalifa Haftar has rejected the memorandum signed by Turkey with the Libyan Government of National Accord (GNA) led by Fayez al-Sharaz.

In particular, according to alarabiya, the LNA accused Turkish President Tayyip Erdogan of trying to exploit the "brain death" of the GNA in order to sign illegal agreements that constitute a serious breach of international law by ignoring other laws.

In a related announcement, the LNA calls on the UN Security Council to intervene to halt Turkish pursuits in Libya. The LNA also accuses Ankara of threatening the interests of the Libyan people by supporting militants and terrorist organizations operating in Libya.

The LNA reacts to the memorandum on maritime zones announced to be signed by Libya - Turkey after the Erdogan - Sharaz meeting last week.

Angela Saleh, president of the Libyan Parliament supporting the LNA, sent a letter to UN Secretary-General Antonio Guterres on the Turkey-Saraj agreement.

The Speaker of the House says the agreement signed poses a risk to the future and the security of the Libyan state itself. He also sent a letter with the same content to the Secretary General of the Arab League, Ahmed Abul Gate.