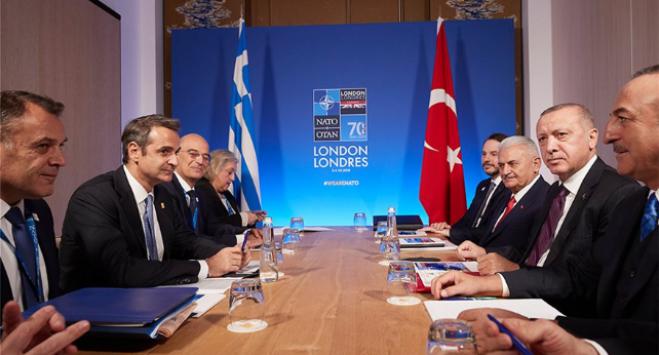 After an hour and 35 minutes, the meeting between the Greek Prime Minister Kyriakos Mitsotakis and the Turkish President Recep Tayyip Erdogan on the sidelines of a meeting of leaders of NATO member states in London was over.

After the meeting the Greek Prime Minister Kyriakos Mitsotakis made the following statement:

“We had an open discussion with the Turkish President Recep Tayyip Erdogan.
I presented all the issues arising from the latest Turkish actions.
The disagreements were recorded. The two sides, however, agreed to continue discussions on the Ministry of Defense level confidence-building measures.
I have instructed the Minister of Foreign Affairs to convene the Supreme Foreign Policy Council to inform the political parties.
I want to assure the Greek people that there have been, are and there will be difficulties with Turkey. I think that as long as both sides show good will these can finally be overcome.”

The “carefree” period on Greek-Turkish issues officially ended after the Ankara-Tripoli Agreement on Maritime Zones, the official announcement of the Turks that the Greek islands “have no maritime zones other than 6 nautical miles” and the coordinates of the continental shelf claimed by Turkey in the Eastern Mediterranean at the expense of Greece that was presented to the UN.

Shortly before the meeting and while nothing had been announced, Tayyip Erdogan met behind closed doors with US President Donald Trump.

At around 4:45 pm Greece the luncheon by the US President to eight European leaders whose countries spend more than 2% of their GDP on defense spending was completed and it included Kyriakos Mitsotakis and British Boris Johnson. Also, Bulgaria, Romania, Poland, Latvia, Lithuania and Estonia participated.

Immediately afterwards and with about 20 minutes delay the Mitsotakis-Erdogan meeting began.