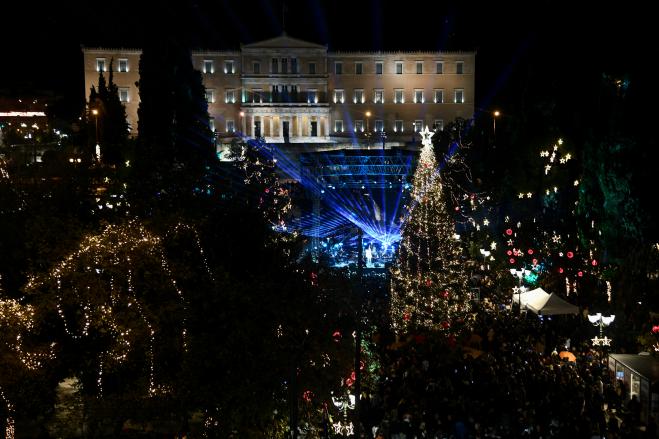 Athenians have been complaining about the Christmas decorations this year after odd looking lighting appeared in iwo of Athens' most emblematic avenues. However all that changed with the decorations of Syntagma Square, where Mayor Kostas Bakoyannis dazzled everyone with what is arguably the best Christmas decor in years.

The City of Athens organized the Christmas tree lighting ceremony of a 17m natural fir from Karpenissi that traveled from the District where the current Mayor of Athens, Kostas Bakogiannis, was active until last year.

From early in the evening, the square had a Christmas flavor, as all the trees in Syntagma Square were loaded with lamps and bright ornaments. However, nothing predicted what would follow. Perhaps only the small stage where the municipality's big band orchestrated was practising.

A celebration of Christmas in Athens
The tree lighting was meant to be a celebration that would officially kick off the festive Christmas season. Hosted of course by Costas Bakoyannis, but also selected guests.

Zeta Makripoulia was the hostess who took over the presentation from the center of Syntagma Square, while the audience enjoyed Elena Paparizou, Ian Stratis and Idra Kayne on Christmas tunes.

Kostas Bakoyannis welcomed the residents who wanted to be in downtown Athens and gave his guests the slogan for the show's launch.

So now Athenians can't get enough of their bespleandored square.