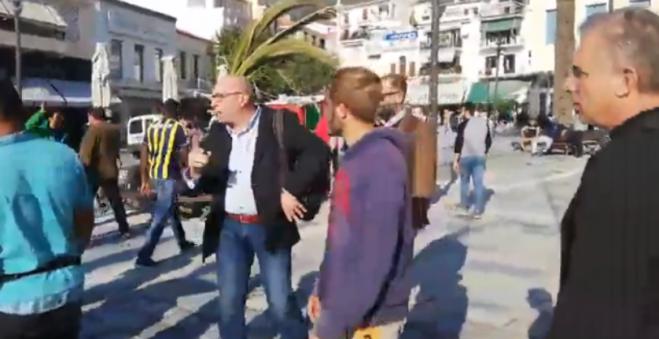 A video posted online by a local site Samos24.gr shows the Mayor of Samos,George Stantzos trying to expel illegal immigrants and refugees who are occupying the central square of Pythogoras.

The enraged Mayor can be seen physically pushing illegal migrants and refugees shouting “Go home you f@@ckers. Leave as the Greek police are also trying to evacuate the main square of the island again which they had occupied previously.

Earlier illegal immigrants and refugees had gathered in another part of the island, but were repelled by police forces, which led them to attempt to occupy Pythagoras Square.

A woman can be seen telling the Mayor she was a tourists when he tried to also expel her, with another woman doubting her claim. “You filth. Get out of here”

Speaking to the person recording the incident, the Mayor explains the refugees had occupied the square earlier and were moved out by the police but came back.

“I thank the police for intervening. We will now start taking action by ourselves, regaining control of our public spaces. We want a solution right now. For them to leave the island! We have had enough! There is no other solution!”.

The Greek islands in the Eastern Aegean Sea has seen a continuous rise in refugee and illegal immigrants’ arrivals from Turkey.

The Greek government has lately tried to alleviate the pressure by transporting many to the mainland in hosting facilities.