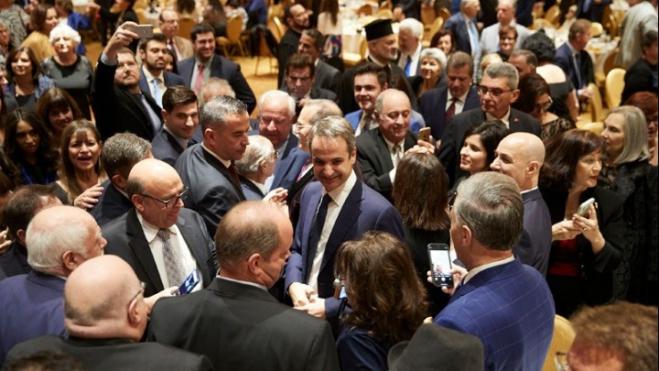 Prime Minister Kyriakos Mitsotakis arrived in Tarpon Springs to a warm welcome from Greek expatriates living in this region on Sunday afternoon local time (early Monday morning in Greece). His visit to the area was the first by a serving Greek prime minister, since Eleftherios Venizelos had not been prime minister during his visit 98 years ago.

Mitsotakis is in the United States for a three-day visit that includes a meeting with U.S. President Donald Trump at the White House on Tuesday.

The Greek premier met with Tarpon Springs Mayor Chrysostomos Alahouzos, U.S. House of Representatives member Gus Bilirakis and spoke with many members of the Greek community in the area.

At an event organised by the American Hellenic Educational Progressive Association (AHEPA) and the Cretan Union of America, the prime minister referred to his meeting with Trump.

"I will discuss with him the serious dangers that Turkey's aggressive and illegal behaviour poses for peace and security in the region. I will repeat that we will not tolerate any kind of violation of our sovereign rights. We will also discuss ways in which we can strengthen the strategic relationship between our two countries. These are times of unprecedented turbulence. We must always remember that our country is a pillar of stability in a region that is more and more unstable. We are, also, a long-term, reliable but also predictable ally of the great country that you call your new home. And I am certain that the strategic relationship between Greece and the U.S. will only grow stronger," Mitsotakis said.

Referring to the East Med Act that was recently passed in the U.S. Congress, the prime minister said this was "one of the most important legislative acts, if not the most important, for the Eastern Mediterranean. It reaffirms the U.S. commitment to the region but also acknowledges Greece, Cyprus and Israel as pillars of stability in an increasingly volatile part of the world. And it is interesting that just a few weeks after the East Med Act was passed that we had an opportunity - a few days ago on January 2, 2020 - to sign a very important agreement in Athens between Greece, Cyprus and Israel for the construction of an EastMed natural gas pipeline. A very important energy and geopolitical project that will allow Europe to have access to the new hydrocarbon reserves that are being discovered in the Eastern Mediterranean."

The prime minister also highlighted the importance that he attaches to issues relating to the diaspora, noting that the least that any Greek government can do is to keep the ties with Greece open. He pointed to recent legislation that facilitates voting by Greeks who live abroad, allowing them to vote from their place of residence.

"With the new law that saw unprecedented parliamentary support, the Greeks of the diaspora will not longer be second-class citizens. They will be able to vote where they live and actively participate in the affairs of the homeland," he said. He noted that the government would have liked even fewer restrictions but compromised in order to secure the 200 vote-majority that was needed for the law to pass. This legislation was an important legacy that needed to be preserved and a good foundation, with nothing to prevent its further improvement, he added.

Replying to Greeks who voiced concern over the recent tension in the region and expressed a desire to help, Mitsotakis thanked them for their contribution in promoting Greece's positions and rights abroad.
Concluding his speech, he stressed that Greeks must stay united and noted that "Greece expects many things from you."

Others at the event included the Tarpon Springs Mayor, AHEPA President George G. Horiates, Bilirakis and Archbishop of American Elpidophoros.

On Monday, the prime minister and his wife will attend the mass at St Nicholas Church and the ceremony for the blessing of the waters, with the thousands of Greeks that have lived in Tarpon Springs for over a century.