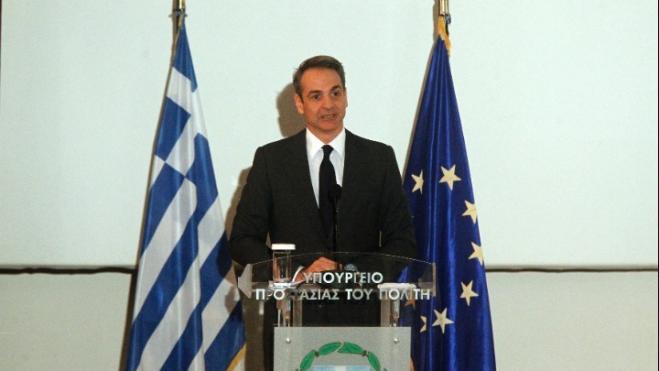 Prime Minister Kyriakos Mitsotakis said the 1989 assassination of Pavlos Bakoyannis by the November 17 terrorist organization "marked everyone in his family," speaking at a special event held in honor of victims of terrorism in Greece, held at the War Museum in Athens on Monday.

Expressing bitterness that "it took too many years and victims until the guilty were held accountable," the prime minister then said that "while this kind of terrorism has been tackled decisively almost everywhere in the world and in western Europe since the 1980s, traces of it still exist in Greece today."

Mitsotakis pointed out that his participation in this specific event comes "from his sense of duty as an elected prime minister who has to protect democratic life and guarantee the rule of law."
The terrorist organization 17N was formed in 1975 and carried out an extensive urban guerrilla campaign, targeting Greek and foreign interests and assassinating 23 people, including American, Turkish and British officials. It disbanded in 2002 after the arrest and trial of many of its members.

Mistotakis then referred to the government's counter-criminal policy and emphasized how the Greek police is being upgraded by means of both new staff and officers and resources. "Three months from now the country will have a National Strategy Against Terrorism and Violent Extremism," the prime minister said, based on estimates of the Citizen Protection minister. He described the strategy as "an institutional yet strategic text that fills a policy gap which has for years cast a shadow on Greece's image in the way it is seen by international organizations."

He also said that a Department of Prevention of Violence is being set up at the Citizen Protection Ministry, along with a campaign to dismantle any elements that nurture violent ideas.
"Because," Mitsotakis concluded, "nothing positive can be achieved without activating ordinary citizens."

Another 1,500 policemen on patrol

In a related development, Mitsotakis announced in a post on social media the strengthening of Athens' police force with some 1,500 police officers.
These officers "are now active in the streets, in aid of citizens," Mitsotakis said, and he underlined how this decision was "the realization of our commitment to do this."