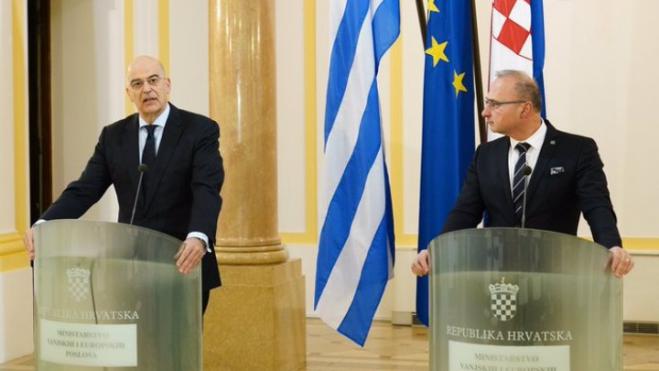 Foreign Affairs Minister Nikos Dendias met with his Croatian counterpart Gordan Radman in Zagreb on Wednesday, where they talked about how the two countries can best work towards the European prospects of western Balkan countries and also manage regional challenges.

In his statement after the meeting, Dendias congratulated Croatia for assuming the European Union Presidency and said that "our two countries enjoy excellent bilateral relations that have greatly been enhanced since Croatia’s EU accession."

He also stressed how "we firmly support Croatia’s entry to the Schengen area, the Eurozone and the OECD," and emphasized Greece's support for "strengthening regional cooperation and promoting the European perspective of our Western Balkan neighbours," and continued to say that Greece is looking forward to the EU-Western Balkans Summit, to be held in Zagreb in May.

Dendias then underlined that "a green light for opening accession negotiations with North Macedonia and Albania the soonest possible is crucial, in order to provide further momentum for reforms in those countries, as well as stability in the broader region. Provided, of course, that the set conditionality is met."

After speaking about Greece's relations with Turkey and the latter country's actions in the East Mediterranean, Dendias said that "the Croatian Presidency has a huge role to play on dealing with Turkey," but this needs further discussion.

"As far as the external borders of the EU are concerned, my government is doing its best to create a better way of protecting the EU borders," the Greek foreign minister said, but taking into account "our maritime environment, the islands, their close proximity to the shores of Turkey, that is not the easiest of things."