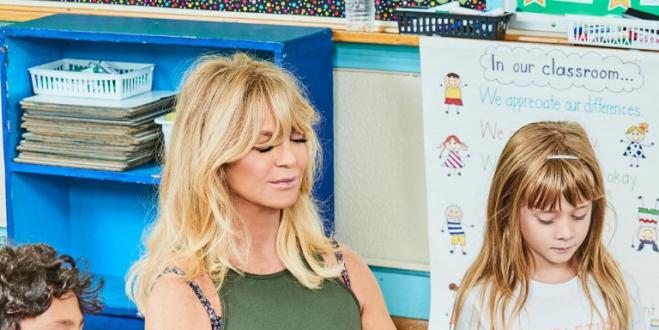 A course organized by Skiathos Municipality in collaboration with Hollywood actor Goldie Hawn has caused reactions from the Church.

The Skiathos Cultural Association, Skiathos Municipality and the Goldie Hawn International Foundation presented the MindUP program last Saturday. The presentation was held at Skiathos Town Hall, with primary recipients being primary and preschool education and the island.

MindUP Specialists Julia Organ and Uz Azfal were in Skiathos and coordinated the English language training day, with an on-site translation by Skiathist Rebecca Nicolaides to facilitate the program and maximize the efficiency of the program.

The aim of the meeting was to implement the MindUp program in schools in Skiathos, which will be the first in Greece, turning the island into a "MindUp island", according to Goldie Hawn. The Goldie Hawn Foundation hopes to be the first of many MindUP schools in Greece!

"I am excited that MindUP will be taught to my beloved Skiathos. It has been a dream of mine for many years now and now our new Mayor Thodoris Tzoumas and the Cultural Association "Skiathos" made it possible. They have the best interest of the children of Skiathos, their mental health and happiness to bloom in school and in life. Much love and blessings to all of you” was Goldie Hohn's own message of cooperation with the Greek island.

Reactions from the Church to the initiative of the Municipality of Skiathos
However, the enthusiasm of the Skiathos municipality for the MindUp program was not shared by the Chalkida Metropolis, which, in a statement, argues that these lessons "originate with Buddhist religious beliefs and practices" and pose a danger to believers.

According to the announcement, which questions the likelihood of elementary school children being overwhelmed with stress, "the stress of young and old is treated with joyful trust and devotion to the true God of love and charity and participation in our Holy Church."

What is Goldie Hoon's MindUp Program?

In 2003, American actress Goldie Hawn and her Foundation introduced MindUP, a training program that, according to its creators, offers children skills to enhance their mental and emotional health, increase self-awareness, and social and emotional well-being.

It is a set of 15 lessons based on, as we read on the official website, neuroscience, and is aimed at students from 3 to 14 years old, with the aim of helping them manage their stress and emotions and develop healthy relationships by acting with kindness and compassion.

MindUp has offices in the UK, US and Canada and according to its creators is one of the most well-studied and research-based programs on the impact on children's mental health.

"After the twin towers, the world looks like it changed in a minute. My heart was with the youth, the young ones suffering from mental disorders and deprived of their happy childhood, "Goldie Hohn wrote in a note on the program's website, explaining that she made the decision to move on.

Now, what kind of stress children on Skiathos would have escapes anyone who has visited the island where "laid back" is a way of life.