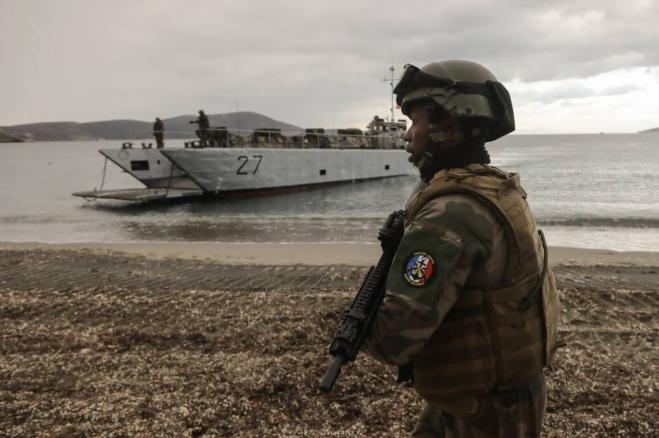 A trilateral joint branch exercise ocalled "Alexander the Great" in Magnesia, Skyros and Ai-Strati, between the military forces of Greece, the US, and France, is under way since Friday morning.

The purpose of the "Alexander the Great 2020" exercise is to further enhance the co-operation of the Armed Forces of the participating countries by improving their operational training level in a multi-threat environment, as announced by Armed Forces General Staff.

The Armed Forces of Greece, the US and France have "sealed" the area between Magnesia, Skyros and Ai Stratis by demonstrating power and sending a powerful signal that Greece has strong allies and its Armed Forces are in constant vigilance.

The exercise "Alexander the Great" was carried out in previous years only with the participation of selected forces from Greece and the USA. This year, however, is the first time that ground forces from the three countries have been trained together on Greek soil, and most notably the first time France has deployed more than marines, selected by the Navy, in one of the most powerful formations of the Armed Forces, the 32nd Marine Corps Brigade.

Marines from the three countries have completed their training in the Magnesia region, specifically in the firing range at Glafyra. According to the plan of the Commanders, inter alia, strikes using all sorts of weapons and means, transport by NH-90 helicopters based at Stefanovikio Magnesia, amphibious landings, tens of kilometers marching, and target neutralization were carried out.

The scenario of the final action on the island of Skyros as designed by Greek, French and American staffs foresees a recapture of an area of ​​the island under the control of hostile forces.

The mighty French helicopter carrier Dixmude as well as the landing ships it transports are expected to play an important role in the final stage of the exercise.

Together with the Greek armored carriers, Chinook and Huey transport helicopters and of course the Apache attack helicopters, are expected to constitute a powerful strike force to recapture an island, as envisioned in the scenario.

land and naval forces are assisted by Greek fighters from the nearby Hellenic Air Forces units at Anchialos and Larissa.