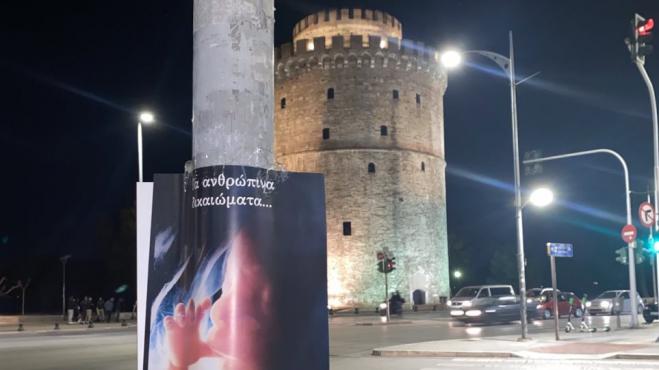 Members of pro-life groups hung hundreds of posters on light posts, bus stations and electricity poles across the city of Thessaloniki and other cities in northern Greece.

The campaign is reportedly coordinated by members of Christian organisations protesting against the removal of similar pro-life posters at the Athens Metro Stations in January.

The posters showed a baby in a womb with the message “Human rights begin at conception”.

The initiative by a pro-life group called “Let Me Live” at the Athens Metro Stations in January had caused a reaction by abortion advocates, resulting in the posters being taken down by the management of STASY SA, upon the instructions of the Minister of Infrastructure and Transport Konstaninos Karamanlis.

The Minister justified his decision claiming the “Let Me Live” pro-life campaign provoked public opinion and could be considered an affront on women’s rights.

The move to take down the pro-life posters sparked an online debate about abortion and its implications on the freedom of speech and expression.

Members of the “Let me live” movement then launched an attack on Transport Minister K. Karamanlis, accusing the STASY administration of violating their democratic rights to freely express and disseminate their opinions to the Greek public.

Abortion in Greece has been fully legalized since 1986, when law 1609/1986 was passed effective from 3 July 1986. Abortions can be performed on-demand in hospitals for women whose pregnancies have not exceeded twelve weeks.