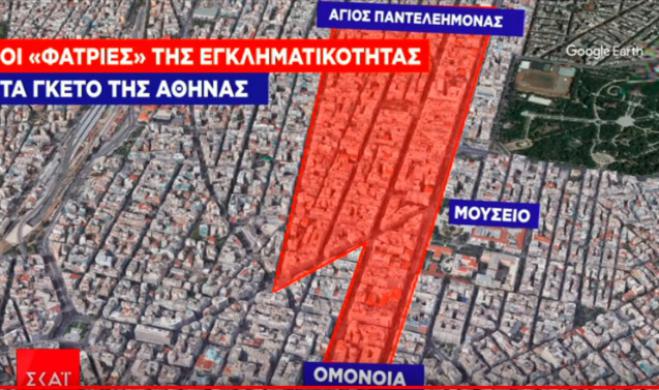 The map of Athens has been divided among gangs of foreigners, as specific points in the city center are controlled by gangs, which clash with each other to control areas.

The center of Athens has been divided into drug, smuggling, trafficking, prostitution, but other zones of thefts and robberies against citizens and cars.

The groups of foreigners who control these areas clash bloodily for domination and even resort to killings, such as the clash between Pakistanis and Afghans on Thursday (13/2/2020) at noon on Menandrou Street.

Indeed, Citizen Protection Minister Michalis Chrysochoidis was interviewed on the incident, who said illegal aliens had no place in the country.

It is also one of the most dangerous places for pedestrians and cars, as perpetrators carry out predatory attacks on a daily basis.

On the map of Athens crime is followed by the ghetto of prostitution, drug trafficking and counterfeit documents. These are the parallel streets of September 3rd and Patissia and almost all vertical streets and squares. Examples include: Ioulianou, Heiden, Epirus, Antoniadou, Veranzerou, Ioulianou, Derigni, Kodrigtonos, Pipinou, Mithymnis, Lela Karagianni, and the squares of Amerikis, Koliatsou, Victorias, Agiou Panteleimon, Pedion of Areos.
Criminal groups from Nigeria, Somalia, Sierra Leone, C Αte d'Ivoire, Afghanistan, Algeria and Morocco are the lords there.

Who ontrols Exarchia - Thefts, Burglaries, Drugs
And the Exarchia area is on the map of crime. On the streets of Tsamadou, Zaimi, Methoni, Derveni, Valtetsi, Arachovis, Stournari, George there are drug, smuggling, street robberies, car burglaries.
These are gangs of Algerians, Moroccans, Syrians, Albanians and Greeks.