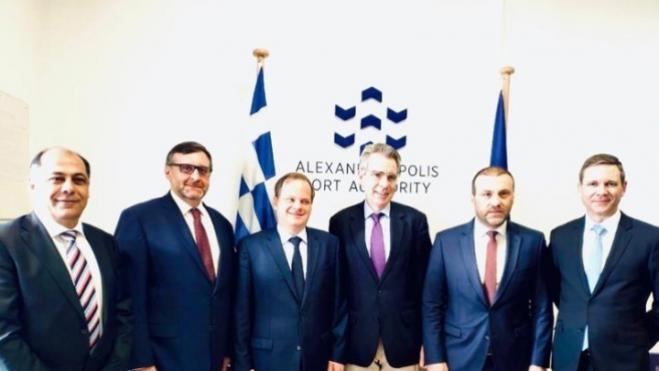 "We are here to underscore our firm commitment to this project, to this port, to support American investment and also we are here to demonstrate our solidarity with the people of Greece and the people of this region in a difficult time," the U.S. State Department's Deputy Assistant Secretary in the Bureau of European and Eurasian Affairs, Matthew Palmer, said on Saturday in statements from the northern city of Alexandroupolis.

"There is a lot of excitement on the part of the United States about this project, about the opportunities, about the prospects for US business to come here, to invest in this port, in this region, to deepen the partnership that we have been enjoying between the United States and Greece on a commercial basis as well as on a strategic basis," he added.

On his part, US Ambassador to Greece Geoffrey Pyatt noted that his presence as well as Mr Palmer's presence in the area is a gesture of solidarity with the people of Eastern Macedonia and Thrace, the people of Evros who have bore the brunt at the recent escalation of the migration crisis at the borders.

"It is also a reflection of the strong strategic focus that the US government has placed on Alexandropolis, it is the reflection of our optimism of the prospects of working with Prime Minister Mitsotakis' government to see to fruition a complex of projects- the privatisation of the port in which there is strong US private sector interest, the execution of the FSRU in Alexandropolis which will play a major role in reinforcing the energy security and independence of the countries of SE Europe, the implementation of TAP and IGB pipelines which are literally changing the energy map of SE Europe and the prospect of Alexandropolis to become once again a major logistics and transhipment point for the wider region," he added.