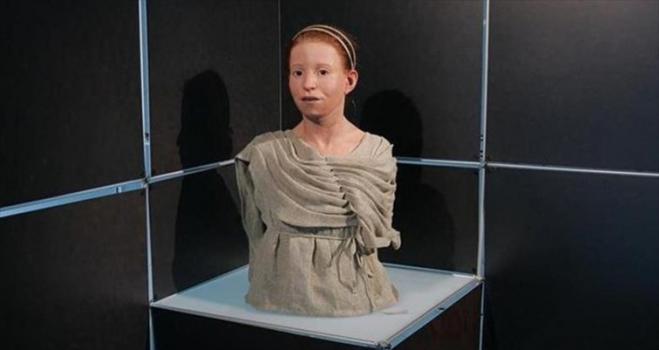 In 430 BC, the 11-year-old ancient Athenian Myrtis − a victim to the great plague of Athens like Pericles - could not imagine that after 2,500 years, she would take part in the global effort against the COVID-19 pandemic. Because Myrtis with her wisdom and her 2,500 years’ experience can feel  the danger that the whole world is experiencing due to a threatening but not invincible  pandemic.
Myrtis, whose face was recreated by the team of Prof. Manolis Papagrigorakis, is starring in an animation video calling us all to listen to the experts, fully respect the hygiene rules and take special care of our beloved ones so that we can have them by our side tomorrow.

In the video, which was a created after a joint initiative of Prof. Manolis Papagrigorakis and the United Nations, the 11-year-old Greek girl  quotes the Secretary General of the United Nations, Antonio Guterres, and agrees with him that the whole humanity together will win the fight against our common enemy.

The little girl, who used to play at the foothills of Acropolis looking at the Parthenon, started her second journey around the world in 2010 in Acropolis Museum.

That same year her collaboration with the United Nations begun and the UN named Myrtis "Friend of the Millennium Development Goals" along with others international personalities  such as the UN Secretary General, Kofi Annan, the President of Ireland  Mary Robinson, and the activist Bianca Jagger. Under this capacity, Myrtis sent a widely translated message to the leaders of the world asking them to save the lives of million children who are dying of diseases like the one who killed her. Diseases that nowadays can be prevented and cured.

Myrtis continues her impressive journey around the world. She has become an exhibition, a postage stamp, a coin, a painting. Her story is taught in schools in Greece and abroad and she has met hundreds of students across the world. She is the theme of scientific conferences. She inspires thousands of people carrying the highly relevant message against war, poverty and child mortality.
In this way, an ancient Greek becomes the symbol of science and universal values that accompany humans from ancient times up to the present day.

They are the same values that are central to the UN’s work since 1945 and until today that we are celebrating the 75th anniversary of our common organisation.

Myrtis reminds to us that the most valuable gifts are life and our beloved persons.

The animation was created by INTO THE VOID and was produced and directed by Prof. Manolis Papagrigorakis.