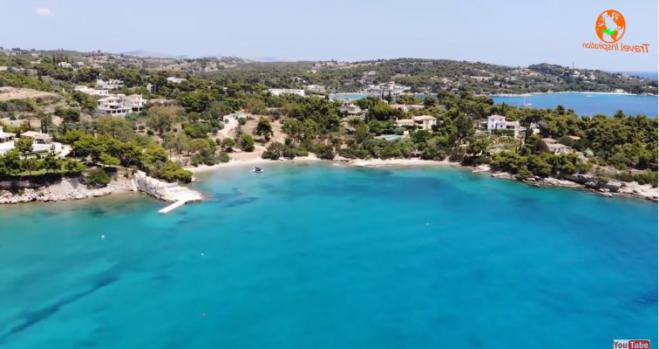 New Greek TV friend Marinos Charalambopoulos and Travel Inspiration take us on a tour of the magnificent landscape in the enchanting Porto Heli, the ancient city of Alieis.

If someone told you that there are two "buried temples" dedicated to the god Apollo, in the mud… below sea level, there is a good chance that you would laugh it off.

But if he was talking to you about where he is, you would be puzzled by how much you don't know about a place that is so close to Athens, and surely many Greeks have visited.

The reason for the cosmopolitan Porto Heli, which is built on the ruins of the fishing village, and took its name from the old inhabitants of the place who were fishermen of the porphyra shells, as well as craftsmen in the processing of the homonymous dye. Essentially, this is a gradual linguistic corruption of the name, to Halieis and then to Heli, while it was nicknamed "Porto", because it had a port.

The ancient city of the Fishermen was built just opposite the present settlement, and its Acropolis was located at the top of the hill.
Of course, the Gulf of Heli was different then, with the sea reaching much further in, which is why part of the city, especially the two temples of Apollo, are now submerged under water and mud, but at a shallow depth. As for today's Porto Heli, with its highly developed tourist infrastructure, it has managed to win the title of "Riviera of the Peloponnese".

And there is not just one reason for this title… It is a natural closed bay with a very large capacity, 85 km from Nafplio, in the south of the prefecture of Argolis, which is flooded daily by various types of sailing boats, yachts and luxury craft. Framed by beautiful tasteful villas and famous luxury resorts, it harmonizes perfectly with the cosmopolitan character of the area.

Its beaches, with crystal clear waters, perfectly organized or not, are located a short distance from the port, the most famous of which is Chinitsa with the golden sand, Kounoupi with the white pebbles, Costa overlooking Spetses and Agios Emilianos. which stretches under the hill with the homonymous church and the wonderful view of the area.

But they are not the only protagonists in this cosmopolitan beautiful puzzle, since nature conspires for the opposite. Mountains and forests that quench their thirst from the saltiness of the sea, create the perfect setting with the sole purpose of seducing even the most demanding visitor.

As for the nightlife, intense and cosmopolitan, with good people but also great food for all tastes.

So there are many reasons, secular, famous, romantic, idyllic, beautiful and especially magical for a trip that even if you have gone before, you have to look at it with a different eye…