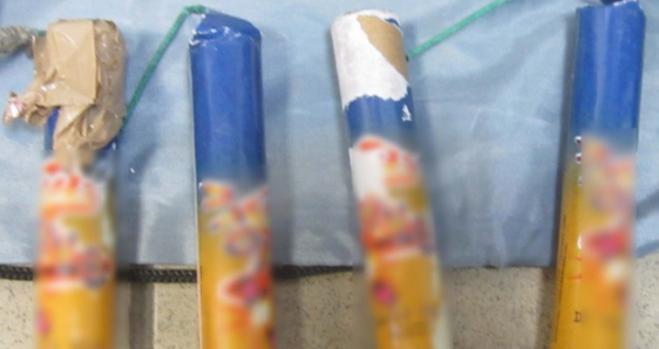 Two young men were arrested in Kalamaria, Thessaloniki, while placing an explosive device in the apartment building where former minister Dimitris Stamatis lives.

One of the perpetrators was located at the time he was trying to activate explosive-incendiary devices in the area of ​​Kalamaria and the other detainee was monitoring the place where the mechanisms would be placed.

It is noted that the two men are said to belong to the organization "Anarchist action" which is responsible for many incendiary acts in Thessaloniki.

As part of the investigation, a grenade, incediary devices, quantities of cannabis and a number of electronic devices (computers, usb, mobile phones) were confiscated, which were sent for laboratory testing.

The multi-day and thorough investigation of police officers of the State Security Sub-Directorate of the Thessaloniki Security Directorate led to the spontaneous arrest of two people (citizens, aged 27 and 28) while attempting to activate improvised explosive devices in the area.

A criminal case has been filed against the detainees for a criminal organization, attempted explosion, attempted arson, construction and possession of explosives that could have endangered a person, violation of gun laws, fireworks and drugs, resistance and disobedience. The detainees will be taken to the competent Prosecutor.

The timeline of the arrest
Specifically, in the early morning hours today (27-05-2020), the 28-year-old was found riding a bicycle in Kalamaria and persistently observing an apartment building where ​​the former minister lives, in which after a while the 27-year-old deposited on the ground, from a backpack , two improvised explosive devices, which he attempted to activate using a flame.

Police officers of the above Service moved immediately and stopped him, despite the strong resistance he put up. Shortly afterwards, the 28-year-old was found in the city center on the same bicycle and was arrested.

Investigations followed in 4 houses in the city center where the detainees were staying, where they found and confiscated:

Ten more people have been charged in connection with the investigation.