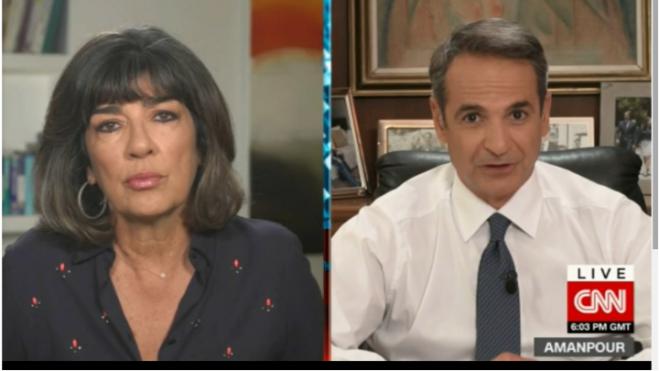 Greek Prime Minister Kyriakos Mitsotakis called on Turkey to stop unilateral actions in the Eastern Mediterranean and start talks with Greece, in an interview with CNN's Christiane Amanpour on Wednesday.

"My message to Turkey is very simple: stop the provocations and let’s start talking as civilized neighbors," Mitsotakis said, adding that the only disagreement with Turkey is the delimitation of maritime zones.

"What we’ve told Turkey very openly is that we should sit and discuss as civilized neighbors," and if the issue cannot be resolved between the two, "then we can always take it to the international court," he noted.

The premier added however that Greece "cannot tolerate is unilateral activity by Turkey," which challenges Greece's EEZ "by sending not just an exploration ship but also a significant number of military vessels to the area." Greece, he noted, "has never escalated tension first."

Turkey is behaving in a manner that does not accord with international law, he said, especially towards a fellow NATO member. "If Turkey considers these areas to be disputed and we consider them to be part of the Greek EEZ, they should sit down with us and discuss about it. This is what we have always proposed. What we cannot accept is a fait accompli as a result of Turkish provocation," he told Amanpour.

The neighboring country is pursuing a policy of isolation, Mitsotakis further said, and said that the issue was not a Greek-Turkish one. "I don’t think this is a disagreement between two neighbors. I think this is a challenge for Europe, it’s a challenge for the world," he stressed. Unilateral Turkish actions threaten the stability of the the region, he noted.

Expressing regret for Turkey's deteriorating relationship with Europe, he said that the neighboring country should know that if it continues its unilateral path, it will damage its relationship with the EU, and there will be consequences.

Asked to comment on a New York Times article claiming that the Greek Coast Guard had abandoned migrants at sea, he said that Greece had been a victim of a misinformation campaign. This is part of Turkey's efforts to "weaponize the migration issue," he pointed out, as Europe saw at the Evros borders between the two countries. It also insults the Greek Coast Guard, which has saved tens of thousands of lives in the sea and the Greek islands that took so many migrants in.

"Greece has every right to defend its borders," he noted, but does so within international rules. It's a country that has granted asylum to tens of thousands, and has been helping refugees integrate in Greek society in partnership with Europe. It is also the first country to organize returns of migrants whose asylum applications have been rejected, in tandem with the International Migration Organization.

"We have a comprehensive migration/refugee strategy, which at its premise has the need to protect both our land and sea borders," he noted.