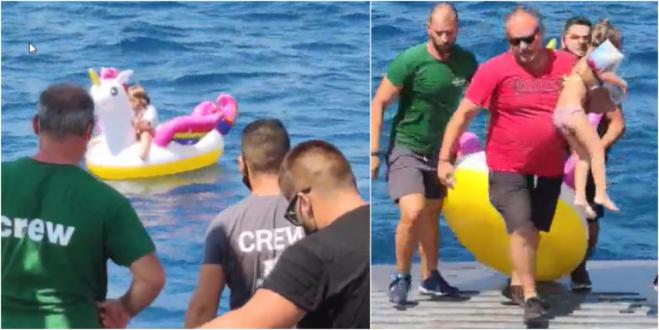 The shocking images with the rescue of a three-year-old girl that had been swept out to sea off Antirrio caused emotion to run high, but also led to questions: How did the child escape from the supervision of its parents?

In fact, many criticized them, accusing the parents of abandonment. However, according to an eyewitness who spoke to npress, the parents never left the child out of their sight.

The father was playing in the sea with the child on an inflatable raft toy. The air changed immediately and the currents swept the little girl from her dad's hands. Several people rushed to catch the inflatable, but they were afraid that the inflatable would overturn and the child might drown.

Everyone swimming there entered the sea and ran to help, but no one could reach it. The inflatable was quickly swept n the opposite direction from the beach. They even tried to cast a boat in an effort to catch it, but in vain.

Immediatelyr, the parents notified the Coast Guard and two ferries went because one could not approach well.

Eventually, the "Salaminomachos" ferry approached the child and crew members rescued her.

The father, according to npress, was shocked. A psychologist advised the parents to take the child back to the sea.

And indeed they did. The child returned to the beach and played with on the sand.