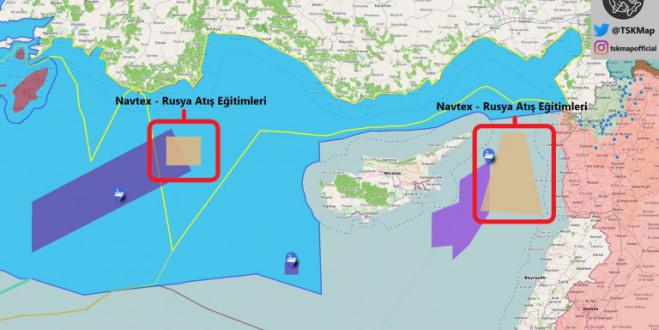 Now, Russia is also involved in the new "incident" in the Eastern Mediterranean, as Ankara yesterday issued two NAVTEX for Russian exercises with live fire, on the edge of the Greek continental shelf, but also east of Cyprus.

Late at night, the Antalya station issued the double NAVTEX called "Russian fire drills". The exercises will be held between September 8-22 and September 17-25 by the Russian Armed Forces, with Ankara stressing that Oruc Reis, which is conducting research in the area, should not be disturbed during the exercises.

It should be noted that this particular NAVTEX came after the decision to lift the embargo, by Washington, on the export of non-lethal weapons to the Republic of Cyprus, a decision that angered Turkey.

Meanwhile, after the uproar caused by the Die Welt article, which wrote that Erdogan would not hesitate in creating an incident, asking the Armed Forces to sink a Greek ship, Ankara denied the news. Turkish Foreign Ministry spokesman Hami Aksoy spoke of "fantasy", with Ankara continuing to receive harsh criticism of its stance in the Eastern Mediterranean from the European media.

However, although Aksoy denied the report, Erdogan's government partner, Devlet Bahceli, openly said that Turkey has every legal right to move militarily against Greece.

"There is a huge resistance to the aggressive ambitions of Greece, France, and some peripheral countries in the Mediterranean and the Aegean. Turkey stands for rights and the rule of law and against tyranny, terrorism, and occupation. The dangerous intensity and the high dose of threats and polarization in foreign policy leave open any possibility. Both international law and our interests as a sovereign state require that we have the right to intervene without hesitation against enemies and traitors," he said.

New US and EU intervention

The escalating tension from Turkey in the region has brought new intervention from both the EU and the US. Mike Pompeo once again called on the two sides to reduce tensions and start diplomatic contacts to resolve the issue.

"We call on everyone to take a step to reduce tensions and to start diplomatic talks on the conflicts in the Eastern Mediterranean," he told a news conference. "We know that the decision (for the partial lifting of the arms embargo on Cyprus) was announced while tensions are rising in the eastern Mediterranean, but we believed that this was what needed to be done and I decided to go further," Pompeo said.

At the same time, the European Commission, through its Foreign Affairs Officer Peter Stano, emphasized that tensions in the region were of no benefit to anyone.

"EU foreign policy has always been that we should follow Plan A. Plan B is essentially about avoiding Plan B or avoiding the situation where Plan B is needed. So we focus on reaching a solution and to avoid escalating a situation in the Eastern Mediterranean into something no one wants to see. Because it is not in anyone's interest to see an even more dramatic escalation and an unfortunate event. That is why all efforts are focused on de-escalation and dialogue, and that is what is happening now," he said.