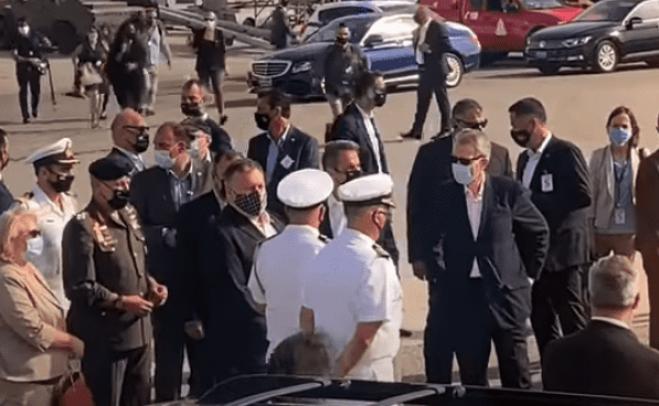 US Secretary of State Mike Pompeo arrived at the Souda naval and air base this morning, along with Greek Prime Minister Kyriakos Mitsotakis.

Mike Pompeo arrived in Greece yesterday, accompanied by Undersecretary of Defense Mike Kratsios. In Thessaloniki they had meetings with Foreign Minister Nikos Dendias, Minister of Development Adonis Georgiadis and Deputy Minister. Christos Dimas, while they signed the US-Greece technology agreement. Shortly afterwards, Mike Pompeo and his wife, Susan, traveled to Chania, where they were welcomed late in the afternoon by Greek Prime Minister Kyriakos Mitsotakis and his wife, Mareva.

This morning, Mike Pompeo arrived at the Souda naval and air base under draconian security measures, together with the prime minister. Watch the video with the motorcade that accompanies the American Foreign Minister in Chania:

Kyriakos Mitsotakis and Mike Pompeo were guided and informed by the commanders of the two bases, American and Greek, and immediately afterwards they went to the naval base in Marathi, at pier K14.

Mr. Mitsotakis and Mr. Pompeo had the opportunity to board and be informed about the capabilities of the CCM (Combat Craft Medium) speedboats which are located on a pier that has been granted to the American forces.

Then they boarded the helipad of the Greek frigate MEKO "Salamis". Their arrival was announced over the frigate's loudspeakers (also in English) and an honor guard awaited them on board.

Apart from the Prime Minister, the Greek side was represented by the Minister of Foreign Affairs Nikos Dendias, the Minister of Defense Nikos Panagiotopoulos, the Chief of General Staff Konstantinos Floros and the Director of the Diplomatic Office of the Prime Minister. From the US side, the US Ambassador to Greece, Geoffrey Pyatt, the US Assistant Secretary of State, Philip Reeker, and two advisers to Mr. Pompeo will participate.

During yesterday's briefing of the political authors, the government spokesman, Stelios Petsas, stressed, among other things, that "the visit of the US Secretary of State, the second visit in just one year, reflects the key role that Thessaloniki plays as a development center for the region. of the Balkans and on the other hand Souda for geostrategic planning in the Eastern Mediterranean and the Middle East ".