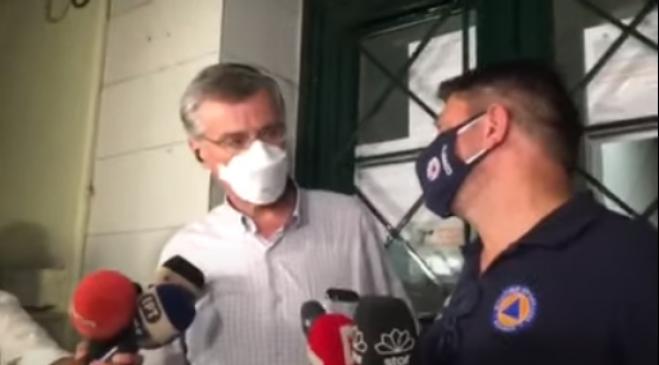 Professor Sotiris Tsiodras yesterday gave an accoumt of the situation concerning the coronavirus in Attica and signaled an alarm.

The professor of infectious diseases visited the nursing home in Agios Panteleimonas where earlier yesterday 32 cases of coronavirus were detected, signaling an alarm to the Authorities. After his visit, in his statements, he also rang the alarm bell saying that Athens is not doing well in terms of the pandemic.

"The dispersal in such places that do not receive visitors is usually dperpetrated by the staff. Athens is not doing well in terms of the pandemic. It is a situation that we do not want to see again and, unfortunately, we continue to see it ", said characteristically Mr. Tsiodras, who used the example of Thessaloniki, where in a short time the cases were significantly reduced. "They learned their lesson in Thessaloniki and Thessaloniki is doing well," he added.

Agios Panteleimonas: One in two positives were tested in August

At the nursing home of Agios Panteleimon, a total of 70 tests were performed and 32 of them, that is, almost half, were positive. Dr Tsiodras rushed to the spot together with N. Hardalias. Cases in nursing homes are something that worries experts especially as it is a closed structure with people from vulnerable groups, the elderly, who often have underlying diseases. In France, Spain, Britai,n and Sweden, they paid a heavy price during the first wave as in many cases the virus entered such structures resulting in the death of many guests in such structures.

In Agios Panteleimon, as stated by the president of EODY, P. Arkoumaneas, a test was performed in August and no positive sample was found. The process of how we got to this over-transmission cluster is now underway. It has already become known that most of the patients were taken to hospitals.

"The specific area had been inspected at the end of August and no case had been found. "We have to see what happened last month," he told state broadcaster ERT, calling on owners and employees to strictly adhere to the measures.

Covid: Attica is in the "red" again with 195 cases

At the same time, the cases of coronavirus in Attica remain at "prohibitive" heights, despite the measures of the state. Of the 354 cases announced yesterday by EODY, 195 concern Attica. Of these, only 26 are related to known confluences. As for Thessaloniki, 12 cases were identified, with the opposition in the two major cities of the country being strong and that is why Mr. Tsiodras used it as an example, showing his intense concern for Attica.