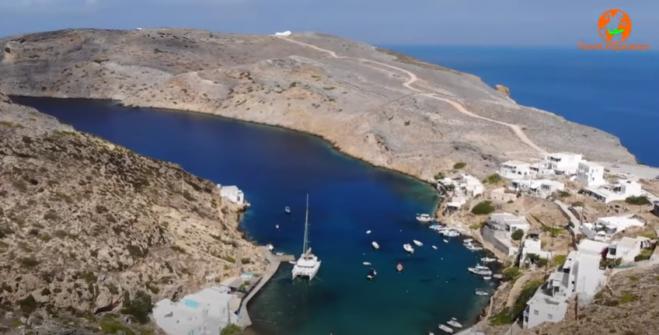 At the northwestern tip of Sifnos, there is a small picturesque seaside fishing village, which is located "hidden" deep in one of the safest natural ports in the entire Mediterranean, and is called Herronisos, and our friend Marinos Charalampopoulos gives us a brief tour.

Its sandy beach has never met the fury of the sea and stands crystal clear in the tranquility of its geographical location, while the blue-green waters rock the small boats of fishermen who flirt daily with the white gulls that follow them faithfully.

The tiny white settlement with the taverns that are literally located on the sea, but also the picturesque monastery of Agios Polykarpos on the beach of Herronissos, compose a scene of indescribable beauty, which in its tranquility remains deeply engraved in the souls of visitors. As for the beautiful picturesque houses that stand perched around the bay, they are mainly the holiday homes of the locals, who seek the peace and tranquility of their own soul, when the island is flooded with thousands of tourists.

In the past, there was a vibrant settlement of potters, since pottery is considered one of the oldest arts practiced on the island since the Early Cycladic period. And while in the first years of its development the workshops were located inland on the island. When the danger of piracy that plagued the Cyclades disappeared, the facilities were moved to the coastal areas. Nowadays there is a small potteryworkshop that operates by the sea and construct mainly useful items for cooking or storage, but also decorations in special forms and beautiful colors, with the most characteristic of all, the "flaro" (clay chimney), a trademark of of the island.