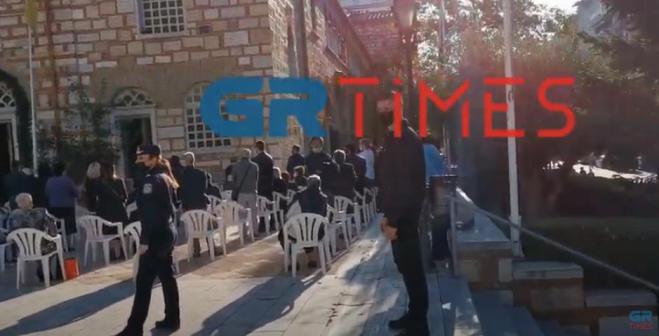 Many believers have been arriving since early in the morning at the Church of Agios Dimitrios, on the day of the feast of the patron saint of Thessaloniki.

On Monday morning a Divine Liturgytook place, while the official eulogy took place at 13:00, in the presence of the President of the Republic Katerina Sakellaropoulou. The official eulogy will be held in camera with a limited number of people.

People, distances, masks for the patron saint of Thessaloniki
The presence of the police was intense, as efforts were made for the faithful observance of the protection measures against the coronavirus, in order to avoid the crowded images that were seen on Sunday. In the courtyard of the basilica, chairs were placed observing the prescribed distances, while outside there were candles and votives for the faithful. According to grtimes.gr, despite the masks and the recommendations, a crowd was created as dozens of believers waited in line to pass into the courtyard of the church. However, police officers who were at the site were constantly making recommendations and giving instructions to the faithful on when they can proceed to the temple. Watch the video:

In the courtyard with the seats at a distance, however, there are many who are in line, next to each other, to reach the courtyard of the church. Watch the video:

However, it was impressive that although the faithful wore protective masks, the same was not true for the priests.