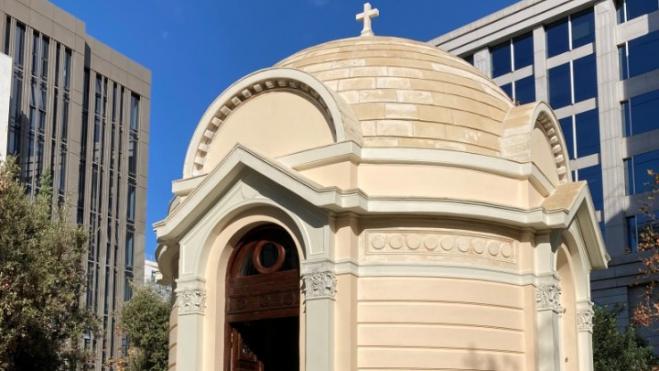 The small, round chapel of Agios Nikolaos Thon, very near the corner of Alexandras and Kifissias Avenues, was turned over fully restored to the Ambelokipi residents on Sunday, Saint Nicholas Day.

Unknown to all but a few, and damaged, the chapel is the only remnant of the "Mon Caprice" villa, belonging to Nicholas Thon, a courtier of King George I and director of the Royal Theater. It was inaugurated in 1895, in the midst of a luscious garden of the estate, with busts of personalities of the day and sculpture pieces. Its plans, originally believed to have been drawn up by Ernst Ziller, were actually done by architect Anastasios Metaxas.

It contains al secco wall paintings separated into zones and geometric designs in its decoration, wooden-cased windows, and stained glass windows that were believed to have been brought from Russia by Thon. An image of the Christ Pantokrator is on the dome, and the chapel also contains a wooden iconostasis.

The Thon villa, which had already changed ownership in 1921, was blown up in 1944 and demolished in 1947, leaving the chapel out of context in the midst of rising apartment buildings in the area. A nearly faithful copy of the chapel was found on Salamina island, on land belonging to Maria Hors, the late choreographer.

Funding for its restoration, which had been a long-standing demand of residents of the area, came from the Attiki regional business program and totalled 550,000 euros. Works were under the supervision of the Ministry of Culture, particularly its divisions of Restoration of Byzantine and Post-Byzantine Monuments, and Maintenance of Ancient and Modern Monuments.

"Today we are turning over the chapel of St. Nicholas Thon, lit externally, highlighting a rare monument that was left destroyed and invisible for many decades," the Ministry of Culture said.