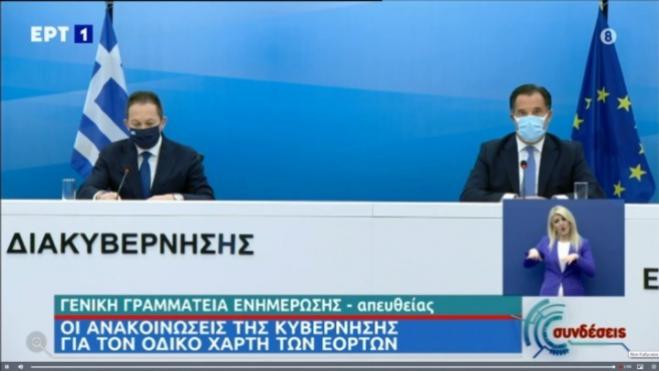 Government spokesperson Stelios Petsas began a press briefing on Friday by referring to the areas where the situation regarding the pandemic remains worrying.

The briefing was held to present the measures that will apply over the Christmas period, with Development and Investment Minister Adonis Georgiadis also participating.

Petsas explained that 83 pct of Greece's ICUs are currently occupied, with a 77 pct occupancy rate in Attica and 91 pct in Thessaloniki. "Unfortunately, the conclusion arising from an evaluation of the data is not satisfactory," he stressed. "The cases are not declining and the decongestion of ICUs is not happening to the extent that was expected. The responsibility for this lies with all of us. We cannot, therefore, resume economic and social activities in the way and at the time we would all like," he said.

"Despite the fact that five weeks have passed since the second lockdown was imposed, the epidemiological situation in the country remains difficult. Cases at a national level remain high. The highest numbers per 100,000 inhabitants are located in the prefectures of Pieria, Drama, Kilkis, Pella, Xanthi, Imathia, Thessaloniki, Larissa and Florina. The situation in West Attica is also worrying - based on the rolling average of seven days. At the same time, the situation in public hospitals, especially in ICUs, remains pressing," he added.

On the strength of this data, and following the suggestions of the experts, Petsas said, the government has made the following five decisions:

- To extend the suspension of non-essential retail trade throughout the country. As couriers are overloaded and cannot meet the increased demand, there will be an exception between Sunday, December 13 until Thursday, January 7, 2021, when customers will be permitted to go to shops to pick up their orders (click-away). The specific details will be presented later by Development Minister Georgiadis.

- Hairdressers are permitted to open from Monday, December 14 throughout the country, with the option of working an extended timetable from 7:00 in the morning until 21:00 in the evening. They must operate exclusively by appointment and with strict adherence to health protocols.

- The opening of bookstores from Monday, December 14, throughout the country, also with the option of working extended hours, and with a maximum of four customers in stores up to 100 sq.m. or one customer per 15 sq.m. for stores over 100 sq.m.

- The opening of churches on Christmas day and the Epiphany. During these two days, the presence of up to nine people in ordinary churches and up to 25 people in cathedrals in all regions of the country will be allowed. The Archdiocese of Athens and local metropolitan sees will be responsible for the observance of the measures. It was also clarified that, during the celebration of the Epiphany, there will be no ceremonies for the blessing of the waters in an open public space.

- The travel ban between the hours of 22:00 to 5:00 will continue to apply for the entire period between Sunday, December 13 to January 7, 2021, as will the requirement to send an SMS to 13033 or carry the relevant documentation to justify movements outside the home. For movements related to shopping, visits to hairdressers and book shops the number 2 should be used.

Petsas also announced that the mandatory precautionary quarantine on those that enter Greece from abroad between December 18, 2020 and January 7, 2021 has been restricted to three days, down from 10 days originally.