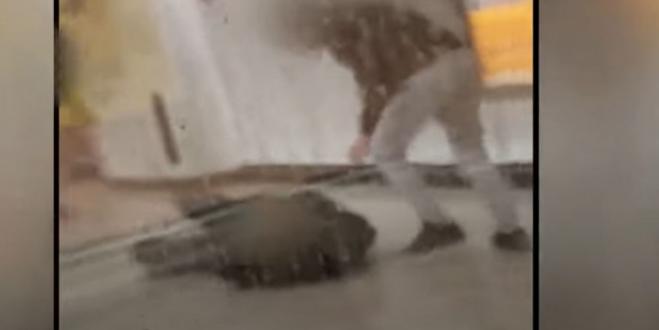 The video that came to light from the beating of the Omonia metro station chief by two people who refused to wear a mask and comply with the measures for the pandemic has caused shock in Greece.

The images are very harsh. The unfortunate man is on the ground and the two attackers are hitting him furiously on the head and ribs with fists and kicks. The passengers who were in the train at that time were knocking on the windows in shock in front of the unprecedented incident. In fact, one of them managed to record the incident with his mobile phone. Shortly afterwards, the two perpetrators ran away from the scene, with the stationmaster remaining on the ground and finally being transported to the hospital.

Chrysochoidis for the beating: They treated him like a beasts

In a statement, the Ministry of Citizen Protection shortly after the publication of the video took a stand on the brutal beating of the stationmaster by mask deniers in the Omonia metro, stressing, among other things, that the perpetrators of the attack on STASY employees will be arrested.

"Today, Wednesday, January 13, two young people behaved like beasts to the stationmaster of the Omonia metro. Noticing that they were not wearing a mask, they spat on him, insulted him, and beat him horribly. Is in the hospital. They will be arrested. "They will be brought to justice," the statement said. Karamanlis: "It is not magic not to wear a mask and much more it is not "bravado" to use violence"

The Minister of Transport, Costas Ah. Karamanlis also posted about the incident on his personal Facebook account.

"A man is in the hospital because he did his job responsibly and protected public health. This cannot be tolerated in our democratic society. Today's unprecedented attack by two people on a Metro worker who asked them to wear a mask is truly unthinkable. It is not "bravado" not to wear a mask and, much more, it is not "bravado" to use violence. The material from the security cameras has already been handed over by STASY to the Greek Police, which I am sure will do everything to identify the perpetrators and hold them accountable. The mask, especially in public transport, is the best shield against coronavirus. That is why the vast majority of passengers comply with the recommendations of experts. Few refuse a self-evident measure. It is incomprehensible why one should refuse a mask that can save both one's own life and the lives of others. I thank those who work conscientiously in the Public Transport and I wish the victim of the cowardly attack to pass by us quickly and quickly ".

As it became known, the incident happened at noon on Wednesday, January 13, 2021, when during the journey from Anthoupolis to Omonia, the employee in question asked two young passengers to put on their masks and one of them to put his feet down. off from the seat. The two young men initially verbally attacked the person in charge of the STASY station, and then, after he landed in Omonia, they followed him, and at the station dock they punched him, while they kicked him in various other parts of his body. The victim with pains in his face and body was transported to the station, from where he was picked up by an ambu;ance to be taken to hospital for first aid.