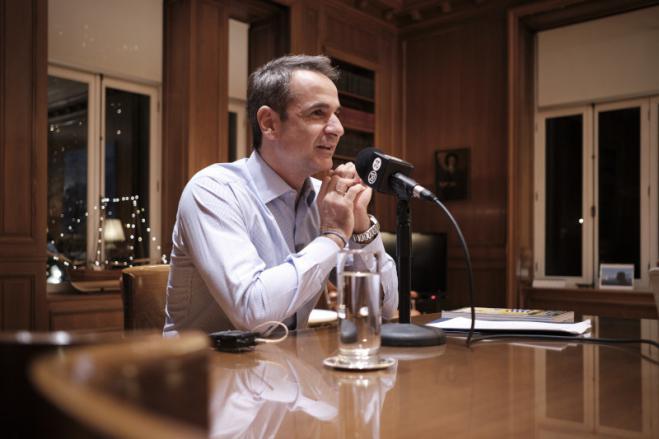 Monocle magazine presents Kyriakos Mitsotakis as a "Prime Minister with an important vision" on its latest front page, which follows the previous issue, which hosted the Greek flag on the cover and ranked our country among the most important powers based on "soft power". That is the performance in the fields of diplomacy, international politics, and cultural influence.

Tyler Brûlé and Andrew Tuck, editorial director and editor-in-chief of the magazine respectively, note that as Prime Minister of Greece Kyriakos Mitsotakis "plays" on the brightest ambitions of his country and, after years in the geopolitical wilderness, seeks to renew the economy and to give the world a new definition of the "Greek brand". It turns Greece into a country of soft power that is worth watching ".

The two journalists comment that Kyriakos Mitsotakis gives impetus "to the revival of national self-confidence after years of painful economic austerity and a populist government", while the title of the interview - "Strike up the brand" - is dedicated to the plan to renew and upgrade the international image of the country.

Tyler Brûlé and Andrew Tuck also mention "the return of very talented Greeks from the Diaspora, the rapid increase in foreign direct investment, the provision of tax incentives aimed at encouraging an increasingly active start-up scene, and a renewed determination in Greece. to play a decisive diplomatic, military, and economic role in the Eastern Mediterranean, where relations with Turkey are strained. "

The Prime Minister sends the message that Greece today is inspired by a new national self-confidence, cultivates a new image abroad based on its talent and untapped potential, while at the same time launching the transformation of its economy and rebuilding the lost trust between the citizens and the state.

"Last year we faced challenges on various fronts. I am not just talking about the pandemic. We have faced serious issues with Turkey, but also with immigration. It was as if we were constantly in crisis management mode. But Greek society really showed unity, especially during the first stage of the pandemic. "Our national confidence was boosted a lot", says Kyriakos Mitsotakis.

"There is a general impression that the country has left behind a time of crisis, a new sense of national self-confidence prevails - which is largely evident in the Diaspora," he said, adding that this gives additional incentives to Greeks abroad to return to their homeland, reversing the brain drain.

Greece is becoming a technology hub
Outlining the strategic goals he has set, Kyriakos Mitsotakis emphasizes: "I want to reform the country, turning it into an open and competitive country, a country that plays a leading role in the region, and above all a country that is receptive to change. and meets the challenges of a rapidly evolving world."

In this context, he notes that Greece will use the 32 billion euros allocated to it by the European Union Recovery Fund for "the promotion of projects aimed at the transformation of the country." He emphasizes that Greece is not "just for a country that can offer exclusively excellent services", but also wants to focus on high-level manufacturing. "Greece is also becoming a technology hub", he adds, while at the same time "it has an excellent perspective to develop into a next-generation biopharmaceutical center".

"We have always been on the right side of history"
The Prime Minister points out, however, that the new identity will be accompanied by the promotion of a different Greece abroad, which will be based not only on the natural beauties and the glorious past but also on the "promising future" and its potential. "What should always distinguish Greece is quality", he underlines, citing as an example the exceptional but lesser-known wines produced by Santorini, which is known worldwide for its unique sunset.

"The history of Greece has always been a history of triumphs followed by disasters. But the route was always the right one. We were always on the right side of history when we were called upon to make great choices Therefore, this year is a good opportunity to look back and learn from our mistakes, but also to draw strength from what we did well and chart our course for the next decade ".