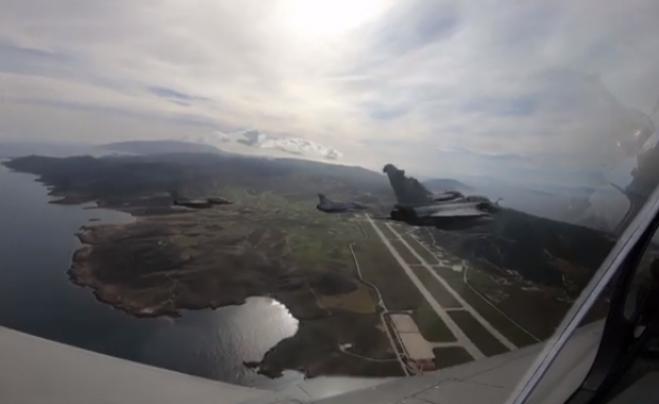 Impressive images with the French Rafale fighters making their appearance for the first time over the Aegean were published as part of the "Skyros 2021" exercise.

The aircraft were in the country as part of a bilateral exercise and took off from Tanagra Airport, along with Greek F-16s and Mirage 2000s, conducting complex air exercises throughout the Athens FIR range. In fact, as part of the exercise, the Greek fighters Mirage-2000 and Rafale were refueled in flight by a French air refueling aircraft Airbus A-330TT at 24,000 feet above Zakynthos.

It is noted that the exercise took place in the presence of the Minister of National Defense Mr. Nikos Panayotopoulos and the Ambassador of the French Republic Mr. Patrick Mezonev.

The French manufacturers have christened the fighters "Rafale", with their name in English translates to "gust of wind", a designation that fully fits with the stormy action of fighter jets in the air and in the field of operations.

"With this exercise, our pilots get a taste of the capabilities of the new aircraft, the supply of which was recently agreed and approved by the Greek Parliament. It is a procurement that the speed with which it will be completed is due, among other things, to the very important contribution of the French Ministry of Defense. This proves that over time we have created a stable and constantly developing framework of military cooperation with France, with which we ensure, strengthen and consolidate a safer geopolitical environment in our region", stressed the Minister of National Defense.