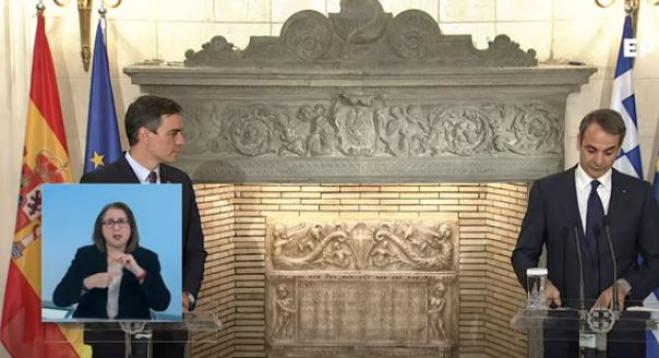 The Greek and Spanish leaders focused on a European digital “Green Certificate” to facilitate safe and free movement within the EU as well as vaccine patents, in their meetings in Athens on Monday.

Greek PM Kyriakos Mitsotakis welcomed his Spanish counterpart Pedro Sanchez to the Maximos Mansion in central Athens in the morning, with both men subsequently attending the 6th Delphi Economic Forum in the Greek capital – after the venue was switched due to the pandemic from the original Delphi archaeological site in south-central Greece.

Mitsotakis reminded that his proposal for a European ‘Green Certificate” was immediately supported by Spain, adding that “this is a passport for the free movement of citizens and a crucial link in the chain of tourism.”

Both Spain and Greece, both premier international tourism destinations, want rapid recovery in the travel, transport and tourism sectors, as both countries’ economies – especially the latter – are dependent on tourism revenues.

Additionally, he added that the global production of vaccines must quickly increase, which is significant for supplying third countries outside the EU.

“The lifting of intellectual rights and patents for vaccines can be only a part of the solution, but it’s a significant dimension of the problem. What’s required is to allow for the production of more vaccines, which will be exported without hindrance to countries in need,” Mitsotakis said.