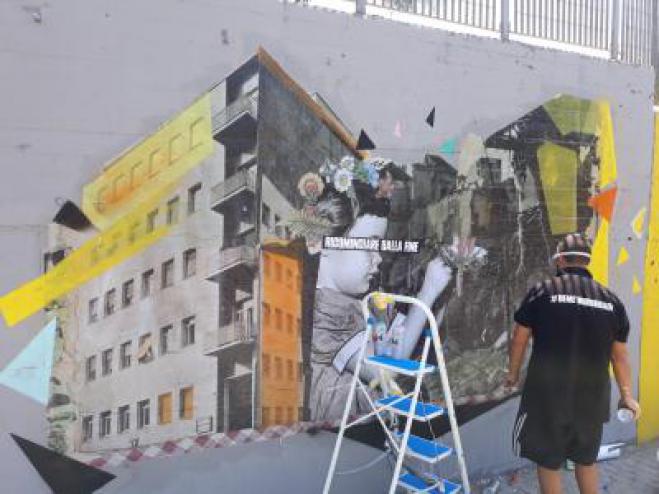 The Municipality of Athens is putting the art of graffiti in the life of the capital, providing for the first time a certain public space to Greek and foreign street-artists, in order to create and express themselves, according to relevant information.

The program for the implementation of public murals, and in collaboration with the Municipality of Athens, the Italian Educational Institute of Athens and Urban Art, includes the new pioneering intervention that took place in the park located on Thessalonikis Street, in Gazi, opposite the Technopolis.

The creation of the Italian artist Demetrio Di Grado was added to the pedestrian street of Thessaloniki Street, which has been turned into an artistic canvas.

Demetrio Di Grado is from Sicily and has been involved in street art for years, combining his collage technique with the art of murals. "Street Collage" made Demetrio one of the most recognizable and active artists on the Italian scene.

His work, which was completed in the previous days, is part of the still unpublished series "Starting from the end".

In this series, anthropogenic and architectural landscapes in which men, women and children, alternate, regenerating other forms and creating new connections, always in close and sometimes dramatic confrontation, with the most modern issues addressed to society and related to the environment, the politics and the future.

As curator Francesco Piazza puts it, "this is an architecture so absurd that it upsets, paradoxically causing a short circuit between what we live and what we have experienced. A time loop in which everything is repeated in different forms, expressing the truth, always creating new and amazing combinations, reaching a synthetic purity that justifies its literary wager and its gaze towards a world that will be rebuilt ".

"This work, as well as corresponding artistic actions supported through our program for Culture, upgrade the relationship of Athens with contemporary art forms. We want a vibrant, creative city. A city that attracts creators and gives the opportunity to young Athenians and those who feel Athenians, to enhance their cosmopolitanism. At the same time, however, we strongly support the culture and cosmopolitanism of the city, putting an end to the anarchic aesthetic vandalism with the coordinated anti-graffiti operations. We say yes to color and art, not to the smudging and abuse of public space ", says in a statement the Mayor of Athens, Costas Bakogiannis.