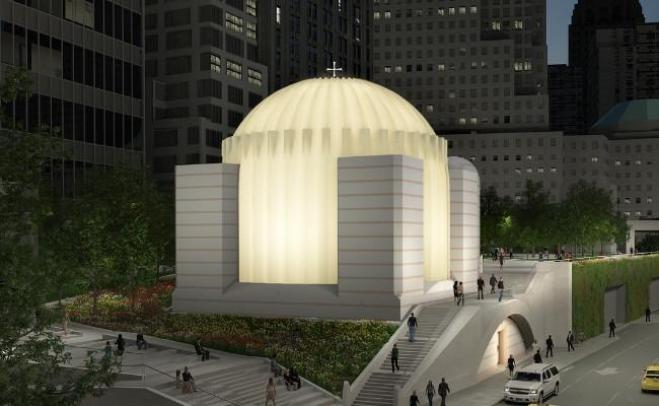 The Greek Orthodox Archdiocese of America and the Friends of Saint Nicholas officially commenced the 20th Anniversary remembrance of the terrorist attacks of September 11, 2001, with a memorial service and the inaugural lighting of the Saint Nicholas National Shrine on Friday, September 10, 2021 at 7:45 EST.

Shining bright up to the heavens, alongside the 9/11 Tribute in Light, is the Saint Nicholas Greek Orthodox Church and National Shrine.

On Septmber 10, the Greek Orthodox Archdiocese of America and Friends of Saint Nicholas hosted a moving ceremony and the first ever lighting of the Saint Nicholas Orthodox Church and National Shrine presided over by his Eminence Elpidophoros of America.

“This Shrine stands before you today to tell the world that light will prevail and always shine on through the darkness, and darkness will never overcome it,” Archbishop Elpidophoros said during the ceremony on the eve of the 20th anniversary of the terrorist attacks of September 11. Part of that glow comes from the Pantelic marble that covers the exterior. The shiny, white marble is the same stone that was used to build the Parthenon in the 5th Century B.C - nearly 2,500 years ago.

Another unique feature, is that the church was modeled after the Hagia Sophia in Istanbul - once the cathedral of the Church of Consatntinople , “It will be for the Orthodox community , our American St. Sophia, “ Michael Psaros, vice-chairman of Friends Nicholas, a non profit raising funds for the building project, told NGTV.

The church will continue to serve the Greek Orthodox community, but inside there will be a separate space for meditation and reflection for people of all faiths.” This place belongs to all Americans, no matter what their faith or denomination is,” his Eminence Elpidophoros said.

World-renowned architect Santiago Calatrava , who designed the National Shrine, members of the Greek-American community, local politicians, representatives of Hellenic associations and organizations, relatives of the of the Greek-Americans who lost their lives that da, were among those who attended the historic event, the lighting of St. Nicholas Church, which was realized after so many difficulties and challenges.

The Parthenon of Orthodoxy, as many have described it, was lit shortly after 8pm sending a message of hope that after the darkness, there is Reresurrection.