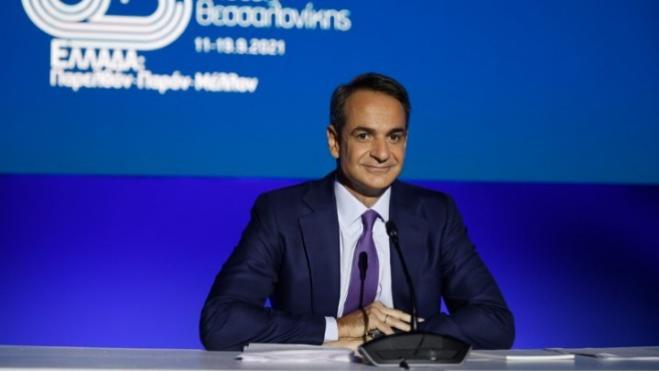 The Greek PM made it clear that the government will continue focusing on their strategy and policy until the next elections of 2023, while he excluded every possibility of communication with the political party SYRIZA (Coalition of the Radical Left ) and its president, Alexis Tsipras.

The Government focuses on the middle-class and youth

Kyriakos Mitsotakis, in fact, referring to the financial announcements he made from the podium of Thessaloniki International Fair, characteristically noted that he avoids using umbrella-terms, such as “benefits package” etc. “All measures obey a comprehensive strategy that is the production of wealth and fair distribution.” “As the economy grows, so much wealth will be created that should be distributed fairly. Reducing inequalities is my main choice”, he emphasized characteristically.

In this context, Kyriakos Mitsotakis defined the social forces in which he bets so as to boost social support in the measures. This social force is, primarily, the middle class and, mainly, the small and medium-sized entrepreneurs, while already yesterday he put the youth at the center with specific support policies.

The Prime Minister in this context focused mainly on the economy, he was very careful and scanty in what he said about the health management of the pandemic. He reiterated that the economy will not shut down again due to Covid-19, while he also seemed determined regarding Greek-Turkish relations and the flow of refugees.

Dividing lines and electoral dilemmas of… 2013

As for the government’s economic choice, the PM said that “Our policy is not expansive, it is a measured policy, noting, at the same time, that the fact that the Stability Pact will change is now a given. “From 2023, I take it for granted that we will return to normality and the country will be able to achieve primary surpluses”.

From there and beyond, in order to serve this strategy, Kyriakos Mitsotakis set specific political conditions, confronting SYRIZA and Alexis Tsipras and essentially shaping the field of political confrontation and the electoral dilemmas of 2023.

In fact, Mr. Mitsotakis added at the same time that the political party New Democracy remains a faction that expresses forces from the right to the center-left.

“Nightmarish” those who are dreaming of “outraged citizens”

Mr. Tsipras has chosen a personal attack against me, against my family. The gutter within the internet leaves no doubt by whom it is directed. I feel that with SYRIZA we are separated by a value and political gap “.

He added, however, that “this does not mean that society is divided. It is my duty to talk to society and to avoid tensions. If some people think that society is in 2011 and they dream of a new movement of “outraged citizens”, they are deeply nightmarish. You can ask Mr. Tsipras himself what he is seeking through all these personal attacks “.

Earlier, the Prime Minister Kyriakos Mitsotakis, referring to the recent reshuffle and the wash out of his initial selection of retired admiral Apostolakis, let fly barbs against Alexis Tsipras without naming him.

“I think I have exhausted my intention to be consensual with people and places that are not in the mood for consensus. I want consent with the citizens. I have no reason to talk about consent with people who a few days before asked for what I actually did and then criticized it.”

Kyriakos Mitsotakis, clarifying that the elections will take place at the end of the four years, referred to the policy of Alexis Tsipras in the period of 2015.

He added meaningfully: “At the end of the four years, the choice of one faction that says it wants to be autonomous will be compared with the choice of the other faction, which I do not understand who this would be, when it talks about progressive governance. Should Mr. Tsipras rule with Mr. Varoufakis? I do not think that the Greeks want to return to 2015.”