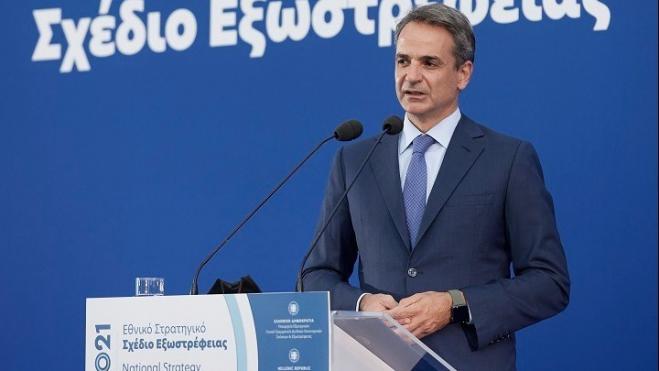 Prime Minister Kyriakos Mitsotakis referred to a significant rise in Greek exports, at the presentation of the National Strategic Extroversion Plan at Hellenic World Cultural Center in Athens on Tuesday.

This fact "is the best proof that export rates serve as the mirror of a competitive economy," especially taking into account the ongoing coronavirus pandemic, he added. Moreover, the competitiveness of Greek products emphasizes product quality more than costs, he noted.

Extroversion means creating wealth that is then shared by Greek society, a key aspect of the government's economic policy, Mitsotakis underlined. He added that development and growth for all is synonymous to reducing social inequalities and to "creating more opportunities for those who need it most." In addition, better-paying jobs in competitive sectors are key to reversing the brain-drain phenomenon.

What foreign investors see in Greece is long-term potential for added-value investments, and this is owed to the fact that "Greece has entered a trajectory of dynamic development in a stable fiscal climate," the Greek prime minister noted, and said that Greece "borrows at the lowest interest rates in its history, having addressed serious issues relating to the competitiveness of its economy in a series of structural reforms."

The Greek Foreign Affairs Ministry must be reformed entirely so it moves from the 19th to the 21st century, Minister Nikos Dendias said at the presentation of the National Strategic Extroversion Plan.

Speaking from New York, where he is attending the High-Level Week of the 76th United Nations General Assembly, Dendias said the restructuring of the ministry had already begun earlier in 2021.

Changes focused in two directions. First was the new organization introduced in February that incorporates best practices in areas such as economic diplomacy and overseas Greeks. It also upgraded its services for the public by digitizing them, with the help of eGovernance Minister Kyriakos Pierrakakis.

The second change relates to doing away with the translation service - where generations of Greeks have translated official documents - which he said ran on the Soviet model of state monopoly and provided "lousy services to the citizens, accruing losses to the ministry's and the state's budget, and employing over 30 administrative staff through a useless bureaucratic process."

The new service, which started operations on September 1, is electronic-based, while further digitization is to follow on official and consular services.

Also addressing the event, but in person, was Deputy Foreign Affairs Minister for Economic Diplomacy Kostas Fragogiannis, who called the prime minister's support for reforms at the ministry 'courageous', particularly in its extroversion focus.

Fragogiannis reviewed the effectiveness of the new extroverted economic diplomacy running during the coronavirus pandemic, involving 27 trips abroad, multilateral relations with international organizations, improved bilateral economic relations with dozens of countries especially inthe Middle East, North Africa and Greece's traditional allies, as well as the strategic dialogue with the United States, and the action plan with Germany. He also mentioned the positive agenda with Turkey, the promotion of sensitive economic relations with North Macedonia and the western Balkans, and the opening of new prospects with countries like Libya and Iraq, and countries farther away like Japan and India.

All this activity led to a "most significant rise in exports," an "increase in foreign investment and promotional actions" and "the spectacular improvement of Greece's image abroad as an investment destination," the deputy minister said.

Exports in particular, Fragogiannis said, shot up by 24.7% in the first seven months of 2021, at a value of 22,11 billion euros, after the implementation of cohesive, targeted actions with prioritization of markets and sectors.