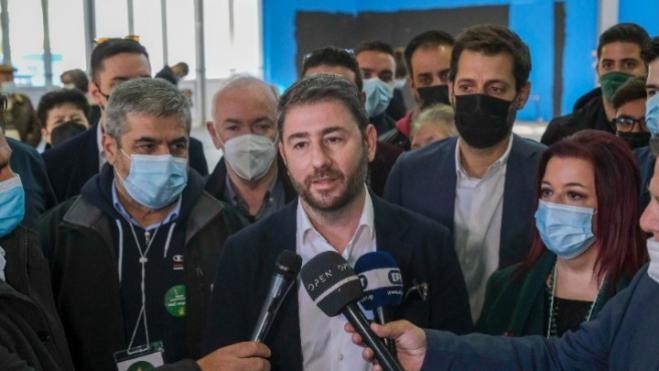 European Parliament deputy (MEP) Nikos Androulakis will be the next president of the Parliament-represented Movement of Change (KINAL) political grouping, as he was leading with 68.42 percent on Sunday with 70.4 percent of the vote tallied.
He bested former prime minister (2009-2011) and veteran politician George Papandreou, who was polling 31.58 percent of the vote an hour after polling stations closed around the country.

Ιn last Sunday’s first round, Androulakis picked up 36.88 percent (98,431 ballots) to Papandreou’s 27.97 percent (74,093 votes), setting the stage for the second round. Another four candidates had vied for the leadership race, including veteran minister Andreas Loverdos, who came in third with 25.98 percent (69,411).

KINAL is essentially the successor grouping of once dominant socialist and social democrat PASOK party, which was founded in September 1974 by Papandreou’s father, Andreas Papandreou, himself a three-time prime minister and one of the most popular but also polarizing and controversial figures for more than three decades in the country’s bruising political area.

The 69-year-old Papandreou’s attempt at a “total political recall” was hampered by the perceived utter failure of his two years as prime minister, which coincided with the nearly decade-long Greek fiscal and economic meltdown, his subsequent decision to create a new political party as an offshoot of KINAL, an initiative which also fizzled out, and the fact that he’s been a fixture on Greece’s political stage for more than three decades.

Androulakis, 42, conversely, capitalized on his promise to return KINAL to its “PASOK roots” and his relevant youth, by modern Greek standards.