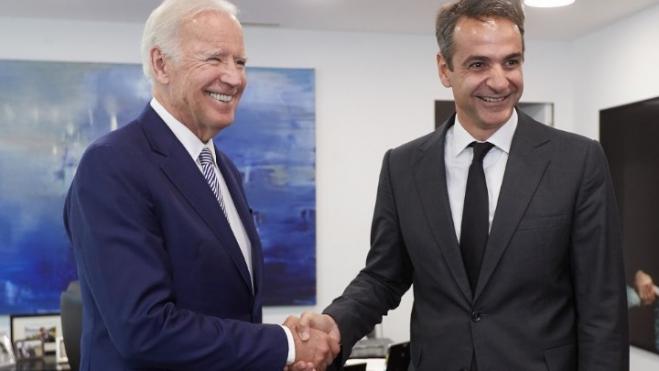 Kyriakos Mitsotakis's trip to Washington and a package of social support measures to deal with the energy crisis and expensive electricity bills are already leaving their footprint on polls, again widening the electoral gap between New Democracy (ND) and SYRIZA.

According to the second part of the GPO nationwide poll for "TA NEA", for the first time in recent months the government finds vital space and acquires new dynamics, which leads to an increase in the percentages of ND. According to the poll, the cycle of losses that had opened since the beginning of the year is closing and the ruling party records an increase of 1.3%, increasing its difference from the main opposition party by 8.9 percentage points.

The changes in the intention to vote for ND and the new image that emerges for the government-official opposition confrontation follow the positive impact for the majority of the respondents from the management of national issues, culminating in the meeting between Biden - Mitsotakis in the White House and the historic speech by the  Prime Minister in Congress, as well as the measures to curb the wave of inflation, primarily with the government covering a large percentage of increases in electricity. It is obvious that in this scenario, rumors of elections are returning to the forefront, but at the same time, the Prime Minister is moving in a less pressing climate for the implementation of government planning.

The same poll also shows a tendency of even limited strengthening of bipolarity, as, in addition to the government, SYRIZA also records a marginal increase (of the order of 0.4%) in relation to the previous GPO measurement. This image compresses the other parties, as both PASOK - KINAL and the KKE, the Hellenic Solution and the MePA25 are showing reduced percentages.

The loud messages for Alexis Tsipras, however, come from the boards for the most suitable prime minister and the evaluation of the political leaders. In the first case, the lead of Kyriakos Mitsotakis over Alexis Tsipras again approaches the 15 percentage points (44.8% against 30.1%). In the second case, from the same measurement, the president of SYRIZA is recorded in the third position of the leaders (with a positive opinion from 36.6% of the respondents), as in a positive evaluation he surpasses him except Kyriakos Mitsotakis (50.1%) and the president of PASOK - KINAL Nikos Androulakis (36.9%). This is another element that shows that the election of Androulakis has shuffled the political deck.

Critical conclusions emerge from the voter turnout, as well as from party affiliations. The balance between ND and SYRIZA is clear in the balance between ND (2.2% of ND voters from the 2019 ballot boxes move to SYRIZA, while the opposite path is followed by 5.3% of SYRIZA voters). At the same time, the largest consolidation (80.4%) in relation to the voter pools of 2019 is shown by PASOK - KINAL, with losses to ND (4.6%) in relation to SYRIZA (1, 9%).