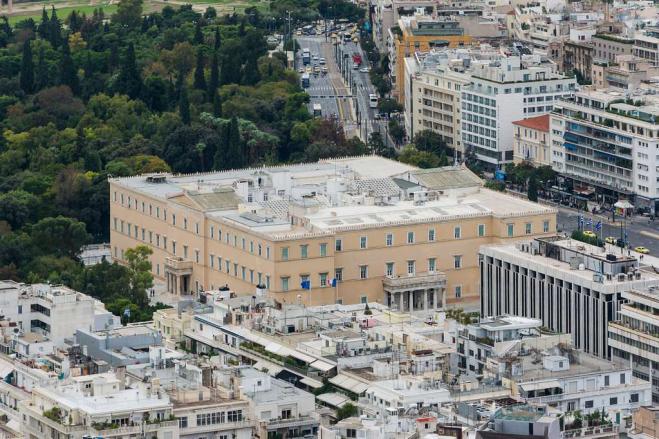 After remaining for about 27 years in the drawer, the renovation of Queen Olga Street is in the process of implementation. Yesterday, six months after the approval of the architectural study of the project by the Central Council of Architecture of the Ministry of Environment and Energy, the tender documents were  "passed" by the municipal council of the Municipality of Athens and the announcement of the tender is expected next time.

The project, with a budget of 5.5 million euros, has a construction horizon of 10 months. It is the "core" of the old plan for the unification of the archaeological sites of Athens that actually began to be implemented in 1995 when the Society for the Unification of Archaeological Sites of Athens (EAXA) was founded. However, it was never completed, although efforts were also made (at least in terms of planning and announcements) later, in 2010, 2013 and 2017. Thus, in the middle of 2020, in the midst of the pandemic and the need of citizens for free spaces, the Municipality of Athens brought it back to the fore with the plan for the implementation of the new Grand Promenade.

Based on the architectural study, Vasilissis Olgas Avenue will be transformed into a pedestrian street, in order to form a wide common area that will unite the archeological site of the Temple of Zeus with the Zappeion and the National Garden and will complete the archeological walk from Kerameikos to the Panathinaic Stadium. The boundary of the study extends from the junction of Vasilissis Olgas Avenue with Vassileos Konstantinou Avenue and Ardittou Avenue to its junction with Amalias Avenue, including the area surrounding Hadrian's Gate.

Emergency and supply vehicles, special vehicles and public transport will be excluded from the traffic ban. Also, the study proposes not to provide a separate bike path, as is the case with the pedestrian streets of Dionysiou Areopagitos and Apostolou Pavlou.

In addition to the renovation project on Vasilissis Olgas Avenue, according to what the CEO of "Anaplasi Athens SA" Mr. Chronis Akritidis said speaking at the 5th ITC 2022 Infrastructure and Transportation Conference, which completed its work yesterday, the "Facade" program for the renovation of the facades of private buildings that has been pending for two years, will start in June with a budget of 1.5 to 2 million euros.

"It is a 'smart' program because the state subsidizes the renovation of an apartment building", he pointed out, emphasizing that the specific projects will bring "jobs to individuals, income to the State while at the same time they will restore the appearance of the city, with for the benefit of citizens." The program, according to what has been announced so far, will give various incentives to the owners, such as free issuance of building permits or supervision of projects and covering part of the cost of works. Also, Mr. Akritidis announced the installation of RES (Renewable Energy Sources) projects in buildings in Athens, in order to support mainly financially vulnerable households.

Renovations will be ready by 2025

For his part, the Deputy Mayor of Urban & Building Infrastructure and City Plan of the Municipality of Athens Mr. Vassilis-Fivos Axiotis stated that in December 2025 the urban regeneration in Athens and the new Panathinaikos stadium in Votanikos will be ready. According to  the Deputy Mayor, about 110 million euros have already been budgeted for the required renovations through the Recovery Fund.

At the same time, Mr. Axiotis referred to the bureaucratic difficulties that delay the urban regeneration, emphasizing that "usually 3.5-4 years pass for the implementation of a project, from its conception to its completion." As he said, it is not accidental that with a ten-year delay, renovation projects were launched in 127 neighborhoods of Athens, maintenance of school units, large-scale interventions such as those of Syntagma Square, the widening of the sidewalks of Panepistimiou Street, etc.

As for the long-awaited B phase of the great renovation in Faliriko Bay, the Attica Regional Governor Mr. Giorgos Patoulis, speaking at the conference, promised that it will start soon, without specifying when.