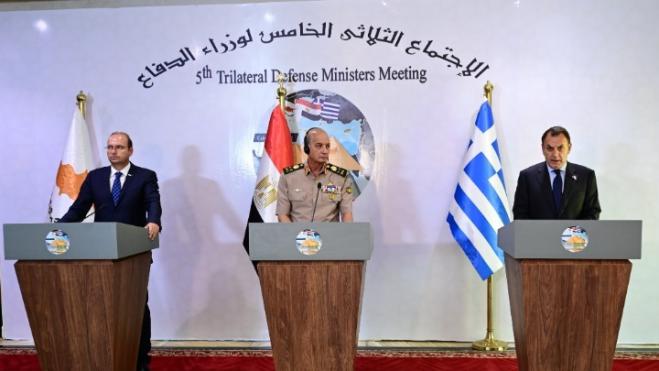 The Defense Ministers of Greece Nikos Panagiotopoulos, of Cyprus Charalambos Petrides and of Egypt Mohamed Zaki held their 5th Trilateral Meeting in Cairo on Monday.

The ministers expressed their common will and determination to develop coordination, cooperation and joint efforts to enhance security and stability in the Eastern Mediterranean region. They also underlined their intention to implement a long-term, coherent and substantial strategic cooperation, in accordance with International Law and the principles of good neighborly relations with all countries in the region.

In their Joint Declaration, the ministers condemned unilateral actions that violate the sovereignty, sovereign rights and territorial integrity of any country in the broader Eastern Mediterranean region, and they stressed the need for all countries to respect International Law and the UN Charter, the UN Convention on the Law of the Sea (UNCLOS), and all other relevant agreements.

Panagiotopoulos briefed his counterparts about Turkish provocations and the overflights of Turkish warplanes, emphasizing that these are completely unacceptable actions, and he stressed that Greece will protect its sovereignty and sovereign rights with determination against any intruder.

He expressed his belief that the further development and expansion of the Tripartite Cooperation, with the participation of other countries in joint actions, with military means, personnel and observers, will assist in the cooperation's pursuits, and will contribute towards security and stability in the broader region.

Finally, it was agreed that the next meeting of the Ministers of Defense of Egypt, Greece and Cyprus will take place in Greece in 2023.