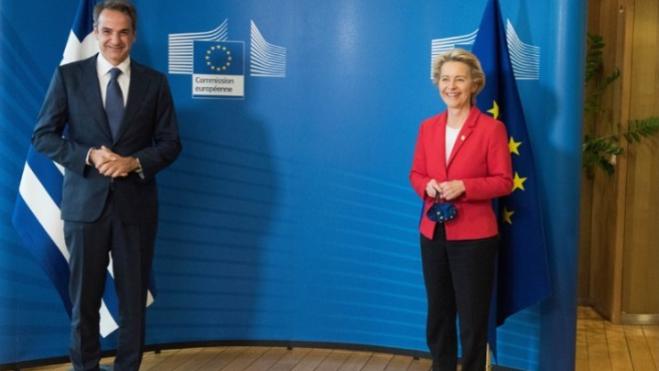 Prime Minister Κyriakos Mitsotakis sent a letter to the President of the European Commission, Ursula von der Leyen, in which he submits his proposal for enhancing energy security in Europe in the coming winter and also for dealing with energy price increases.

I am writing to you with a proposal to enhance our energy security for this coming winter and, at the same time, reduce natural gas and electricity prices. I believe it is time to combine our most important asset, European solidarity, with one of our most important levers for boosting energy security: our own consumption. I want to propose a Europe-wide mechanism to compensate industrial users for reducing their gas and electricity use for the coming winter.

The idea builds on the critical work that the Commission has undertaken in the “ Save Gas for a Safe Winter” Communication. It presents a midpoint between the voluntary demand reductions that we must all identify, and the mandatory reductions that might come in an emergency. By offering financial incentives, rather than relying on the penalty of interruptions during an emergency, the proposal is more likely to unlock a firm and sizable response from industry.

According to the Commission’s estimates, the European Union would be short 45 billion cubic meters (bcm) if gas flows from Russia were reduced to zero. If we could identify, by September, a large percentage of those volumes in firm commitments to reduce consumption, the risk premium would be suppressed, and Russia’s weapon would have been largely neutralized. The fear of physical shortages would diminish and a small sense of normalcy could return to the market.

Energy markets have established instruments for paying users to not consume energy when this is beneficial for the system as a whole. The mechanism I propose would be more expansive, covering reductions in demand for several months rather than hours or days. To work, this tool would combine elements from energy market design-when, how much, for how long-and a way to compensate industry fairly. Ideally, we would blend national and European resources, demonstrating solidarity and allowing funds to flow to those most capable of reducing their consumption. It is an idea that mixes economic and energy efficiency with European solidarity.

The benefits from a successful implementation of this idea would likely be significant. The economic gains for our economies and trade balances from lower gas and electricity prices would most probably offset any outlays that this program would require. It is an idea that will likely pay for itself, lessening the need for the budgetary support that several Member States are already engaging in. But it is an idea that must be implemented quickly-it only works if we can identify these volumes by September, showing our resolve to Russia and resetting how the gas market views Europe. It is an important opportunity for a bold move to protect our economies and our citizens before the coming winter.

I hope you find merit in this idea and remain at your disposal for a more detailed exchange.