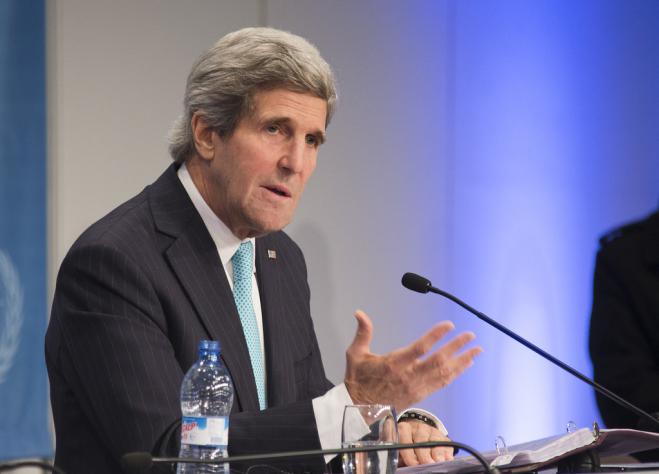 Special US Presidential Envoy for Climate John Kerry will pay a visit to Athens on Sunday and Monday (August 28-29), to meet with government officials on efforts to reduce global emissions, decarbonize ocean-based shipping, and continue the momentum of the Our Ocean Conferences, the US State Department said in a statement on Friday.

Meeting and dinner with FM Dendias

Foreign Minister Nikos Dendias met with John Kerry, the United States Special Presidential Envoy for Climate, at the Greek foreign ministry on Monday at 12:15.
The meeting with the former U.S. secretary of state focused on initiatives to protect the marine environment and the organization in Greece of the "Our Ocean Conference" of 2024, the foreign ministry said, as well as further prospects for bilateral cooperation.

On Sunday night, the Minister of Foreign Affairs, Nikos Dendias, participated in a dinner with John Kerry.

Norwegian former foreign minister and top UN official Terje Rod-Larsen also participated in the dinner, according to a post by the Ministry of Foreign Affairs on Twitter.

This is the second meeting between Kerry and Dendias in the space of a few months, following a meeting that took place in Washington in May.

Meeting with PM Mitsotakis on Monday

At 10:00 a.m. on Monday, Prime Minister Kyriakos Mitsotakis will have a meeting with the US President's Special Envoy for Climate, John Kerry.

The prime minister met again last October with John Kerry in Saudi Arabia on the sidelines of the Middle East Green Initiative Summit, in which both participated as official speakers. twitter.

Greece will be hosting the rotating series of "Our Ocean Conference" in 2024.

This trip will also be an opportunity to engage in discussions on climate cooperation ahead of the 27th Conference of the Parties to the UNFCCC (COP27) to be hosted in Sharm el-Sheikh, Egypt on November 6-18, the State Department said.